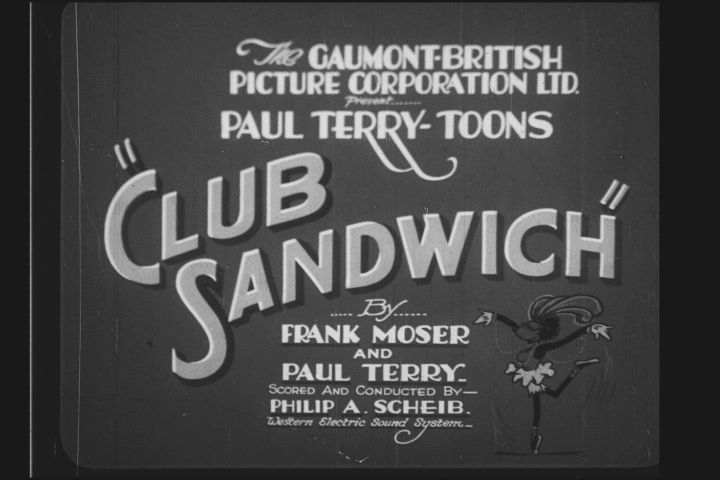 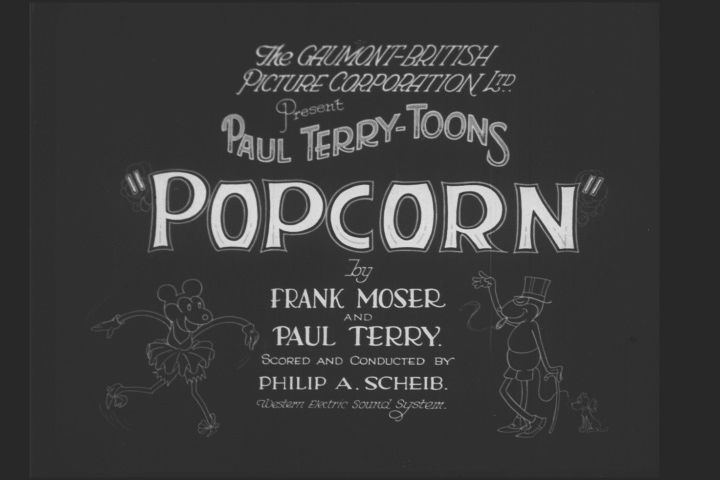 These two 35mm nitrate prints of the 1931 Terrytoons, “Club Sandwich” and “Popcorn” turned up recently on British Ebay. My friend Steve Stanchfield, had the temerity and courage to bid on them, and he won! He then sold them to me, I fixed them up a bit and ran ’em off. “Club Sandwich” is a minor mystery historically, in that Leonard’s book saysÂ it’s “on studio records as DANCING MICE”. Actually, that’s the title of the TV version of the cartoon, edited by CBS. For the most part the two versions are alike, until nearly the end of the story, as the mice tie a line to Farmer Alfalfa’s leg and run him through the “gauntlet”, meaning through mouse holes, up and down chimney flues, over the roof and so forth. The propelling instrument for this high velocity drag is a mule: 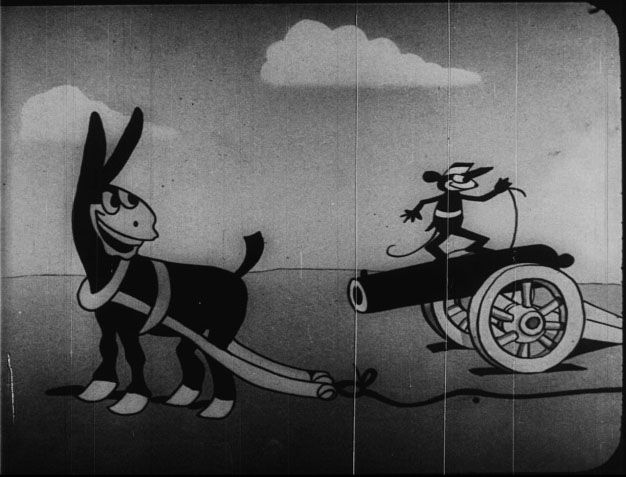 Â The little mouse shoots the mule with the cannon, causing him to run off at high speed (note the line attached to him). In DANCING MICE, the action cuts just after the cannon is fired, to Farmer Al being dragged. In CLUB SANDWICH, the mule emerges from the smoke: 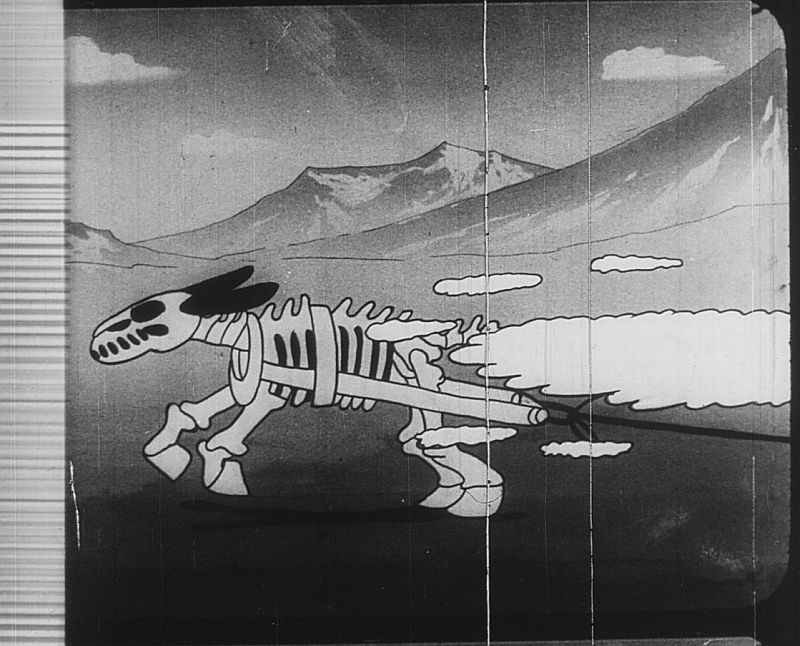 without his SKIN!! Farmer Al is then dragged through all the mouse holes and on to the horizon for the iris down. In DANCING MICE, the last scene is joined in progress, and you can barely see the mule in the distance. In CLUB SANDWICH, the mule’s bones run into the shot in full view of the mice, then Farmer Al enters the frame: 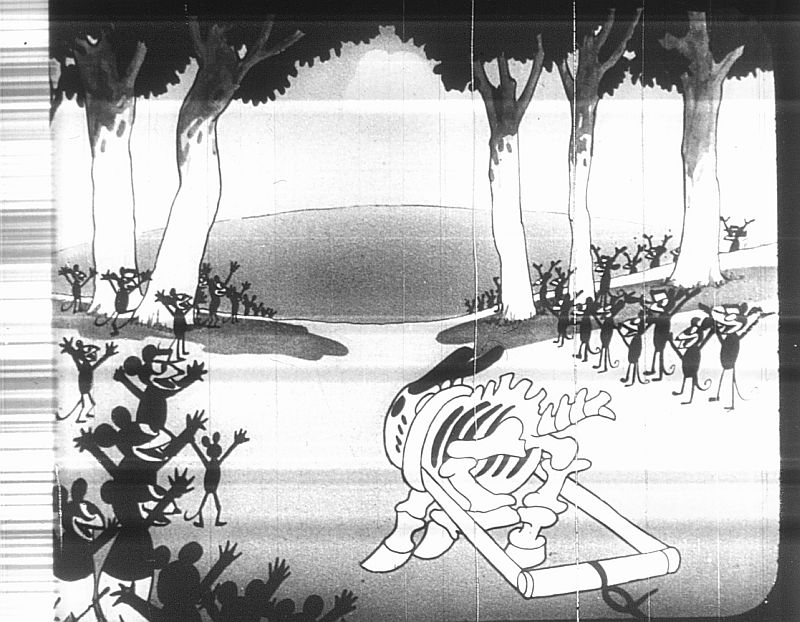 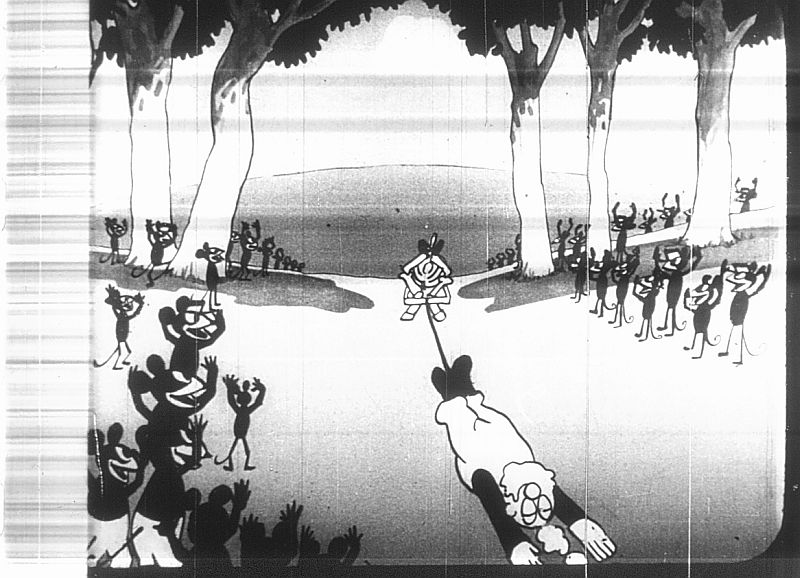 Â The frames with sound track attached were scanned direct from the nitrate print, sometimes they are a little streaky. The rendering of the trees and mountains is beautiful, reminds me of Japanese artists like Hokusai. Far too many of these 1930s Terrytoons exist only in the CBS TV versions, with many cuts and alterations. Obviously somebody at CBS didn’t like bones or skeleton gags as you’ll see in the Terry cartoon “Popcorn”, comin’ up next on this channel. So long to 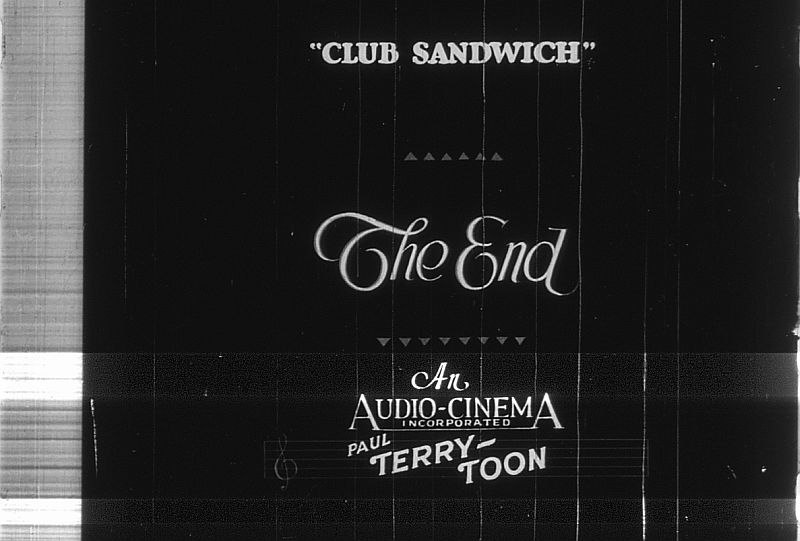 Â (note this is the original end title card, the main title cards upstairs are the British titles).

Out next cartoon, “Popcorn” is one of the 1930s Terrytoons that was NOT shown on Television, probably the same CBS censor who cut “Club Sandwich” didn’t care for the haunted house sequence in “Popcorn”. Most of the cartoon is the boy and girl mouse enjoying a day at the county fair, riding the rides, grabbing for the brass ring, etc. When they enter the haunted house “ride”, here are a few things they saw: 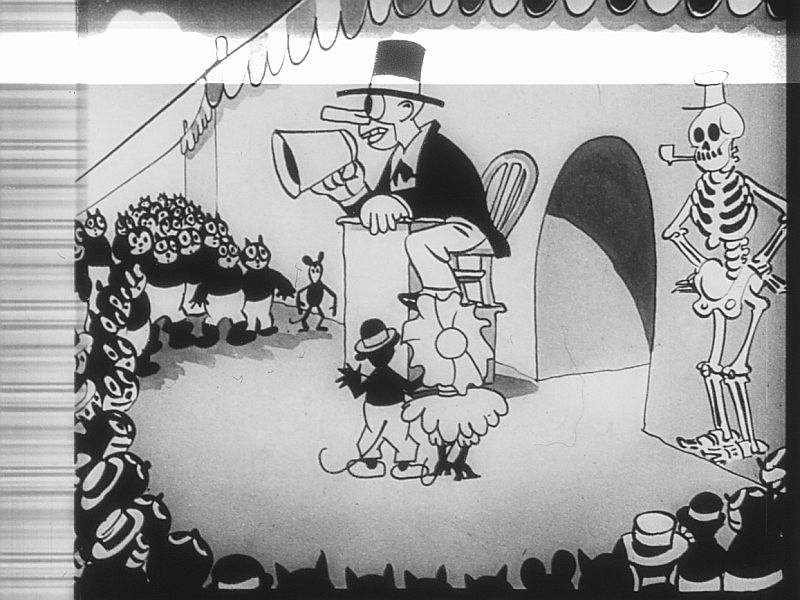 Â The barker outside the haunted house tent, with pipe smoking skeleton on the “poster”. 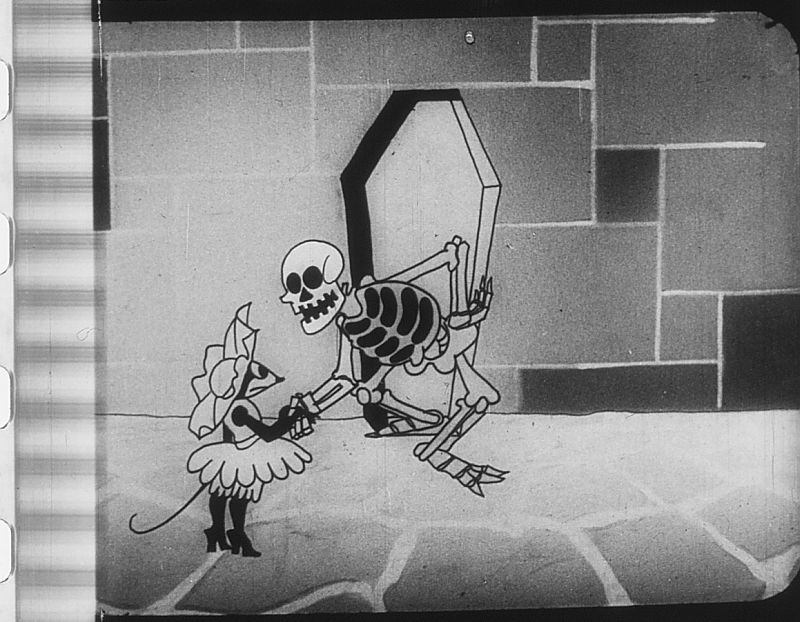 The Girl friend meets one of the residents of the haunted house, who steps out of a coffin-shaped doorway. (Note that the frame grabs show how the early sound films just cut an area outÂ on the left side of the frame to allow for the sound track. The rest of the picture area (or “aperture”) is painted top to bottom. In projection, a lot of this picture information is cut off. Sometimes this is called a “Movietone” aperture.) 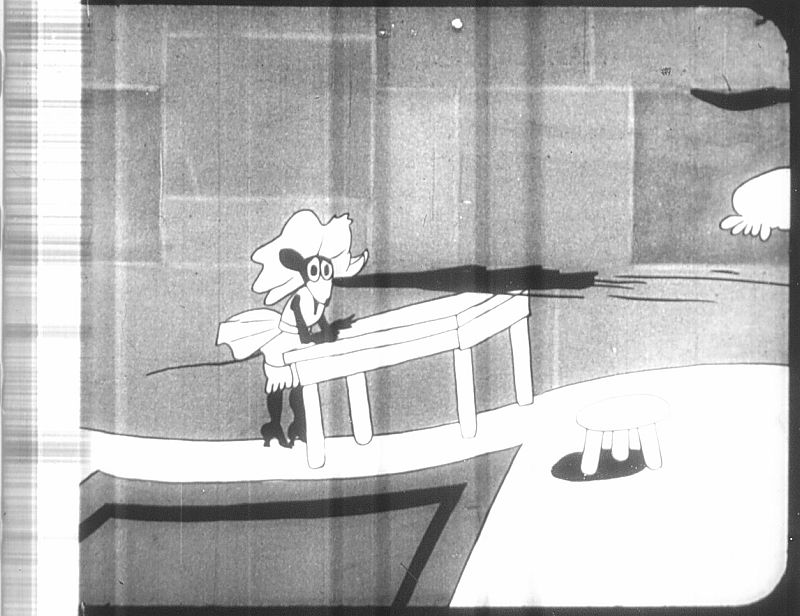 The Girl Mouse hallucinates from her contact with ectoplasmic phenomena and the floor and furniture come to life.

Â Here is an early layout/editing technique that the Terrytoons studio used quite a bit. Popping a completely different background behind the characters while the characters continue to move in the same picture plane as if the change had not occurred. This was a great money saver and time saver. The backgrounds and layouts didn’t have to be conformed to live-action style cut aways at all, just pop ’em on! In this example, the tracks and the mice animate, but rather than try to animate the background with the roller coaster tracks back to the horizon, a simple wall design is substituted, which animates in perspective. The “cut” to a different background works because we are watching the characters. The early Terrytoons were very lazy about the character’s feet slipping on pans in slow walks, so they had a lot of chases, where the slipping isn’t as apparent.

It’s wonderful to see these early Terrytoons, even in British prints, which sometimes have their OWN censorship problems. How different our image of Terrytoons might be today, if we could see them with all the strange and terrifying images restored. I have a feeling we might make more comparisons between Terrytoons and Fleischer if we could see more of the uncut Terrytoons. When Network Television (CBS) got involved in marketing the Terrytoons of the 1930s, an historic decision was made. “Cartoons are for Kids”. The heavy editorial hand descended and any gags remotely appealing to the Moms and Dads, especially the Dads, were out. The early walls of the cell in which cartoons are forever imprisoned were being constructed. Let’s hope that the original 35mm negatives, now entrusted to the UCLA Film Archive, contain all the gags and ideas that CBSÂ wouldn’t allowÂ us to see in 1956.

Felix (3/18 to 3/24/1935) continues his adventures at sea. Patch and Spike, greedy sailors, want all the gold for themselves and store it on a lifeboat. They try to escape with the goods, butÂ fortunately for the crew, Felix, their lucky mascot, is asleep on board the lifeboat. I love the second panel in the 3-21 strip. The staging is so crowded that it looks like Spike’s nose is sniffing Patch’s hand. The Sunday continues Felix’s adventures in Dreamland. He uses the Giant’s pipe to blow a bubble that will carry him into next Sunday’s strip.

Krazy (1-27 to 2-1-1942) centers around Offissa Pupp’s Jail for most of the week. I love Krazy’s Owl friend in the 1-31. Herriman drew owls very well, this one would have made a good continuing character. 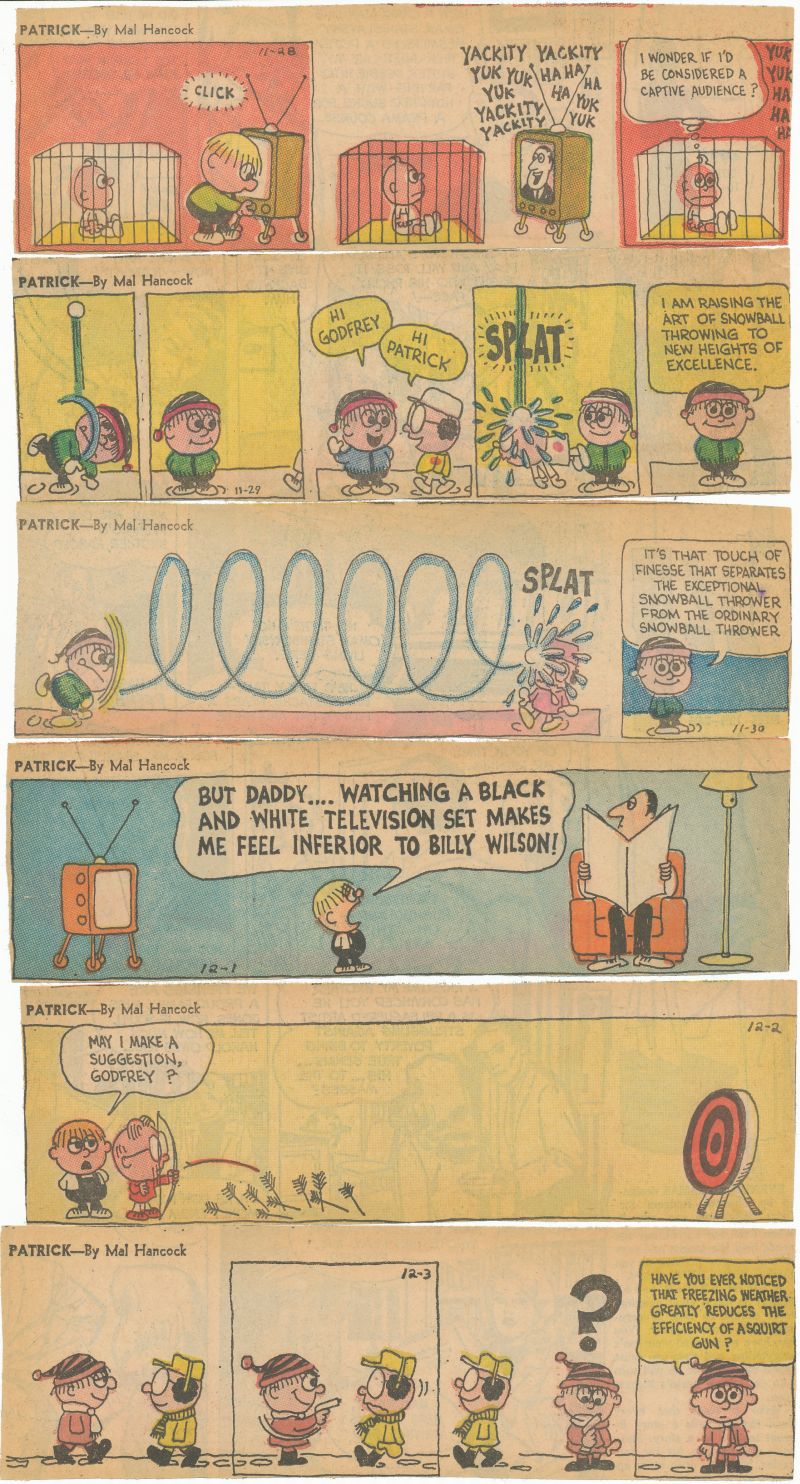 Patrick (11-28 to 12-3-1966) has a lot of winter time jokes involving snowballs and squirt guns. Patrick’s dad appears in the 12-1, and his brother Nathan in the 11-28. Mal Hancock used the single panel daily a few years before it’s use became wide-spread. Now two panel and one panel dailies are common-place given the tight space that newspapers allow comics, but Mal was using them when they stood out from the crowd a little more.Â They looked “modern” and eye-catching. 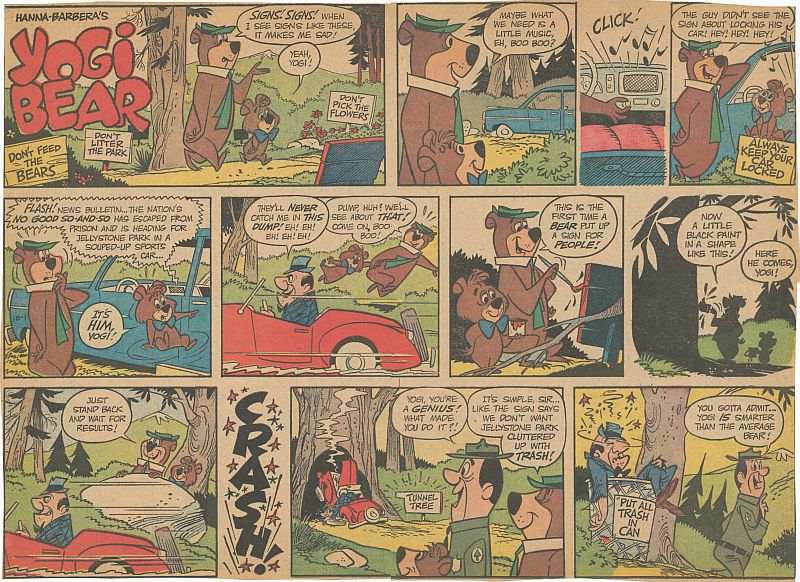 Here, as an adjunct to Yowp’s latest post, are the half-page, color versions of the Yogi Bear Sundays from October, 1961-all FIVE of them, whew! It seems to be controversial whether Harvey Eisenberg actually drew these or not, a lot of the poses and especially the title lettering look like Harvey’s work to me. Some of the incidental humans could be Gene Hazelton’s designs, don’t know for sure. Remember to click on the thumbnails to see them at full size. Even though this is not a “regular” post, I’m going to quickly put up my regular comics:

Felix (3/11/1935 to 3/17) gets the gold and the prize Dodo fish all in one swoop. I love the last panel of the 3/16, as Felix ruminates on his “Prize”, making good as the ship’s mascot. The little guy really appeals to the heart, not a greedy bone in his body. In the Sunday, Felix sums up his life in the 6th panel, “Life is just oneÂ jam after another, for me.”

Krazy (from 1-20-1941 to 1-25) has the usual alarms and excursions, including Garge’s penchant for disguising his characters. This time, along with Offissa Pupp and KrazyÂ (1-24 and 1-25) evenÂ the BRICK is in disguise. 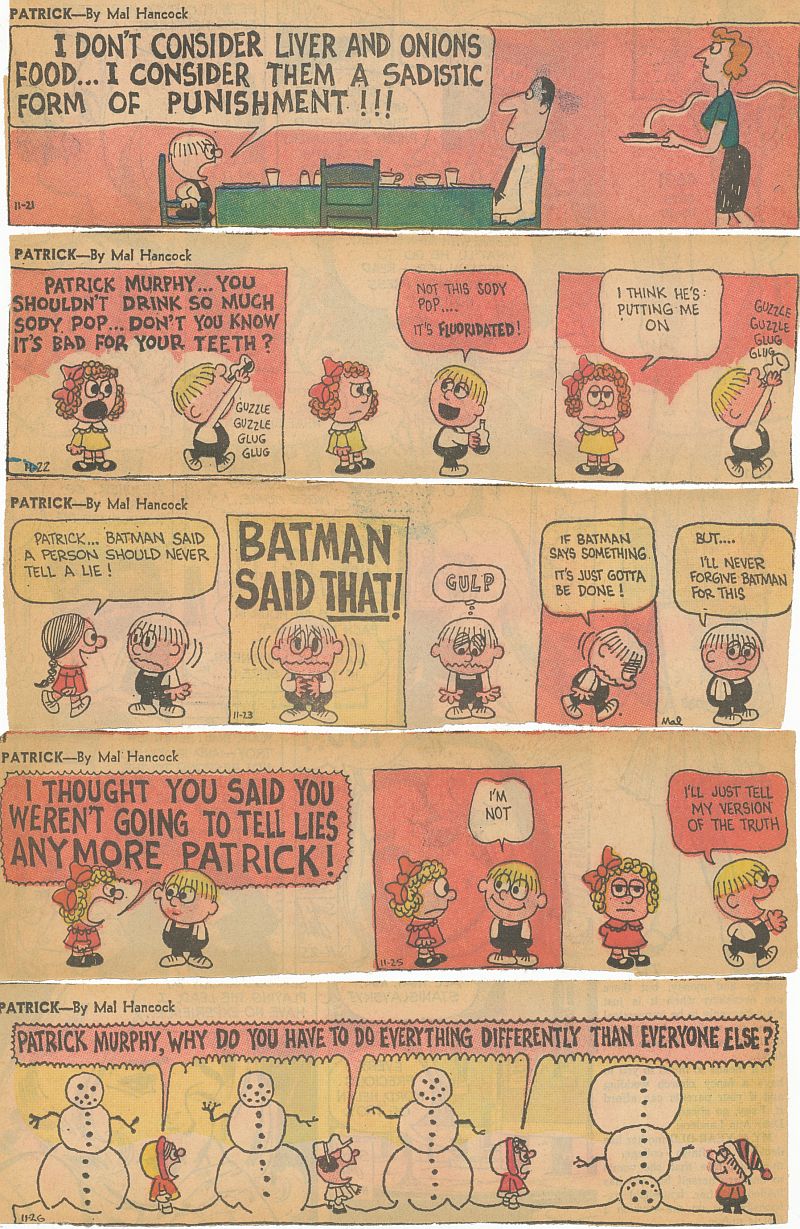 In Patrick (11/21/1966 to 11/26), Patrick declares liver and onions to be a “sadistic punishment” in the 11/21. I used to have a theory that liver and onions were a cure for the common cold. Every time I felt a cold coming on, I would drop down to the local Astro’s coffee shop for a plate of punishment. Invariably, I would wake up the next morning feeling fine. In the 11/23, Patrick’s hero, Batman, disappoints him. You will notice that the 11/24 is missing, the Post-Dispatch did not publish on Thanksgiving that year. See you next time with a little bit more fleshed-out post.