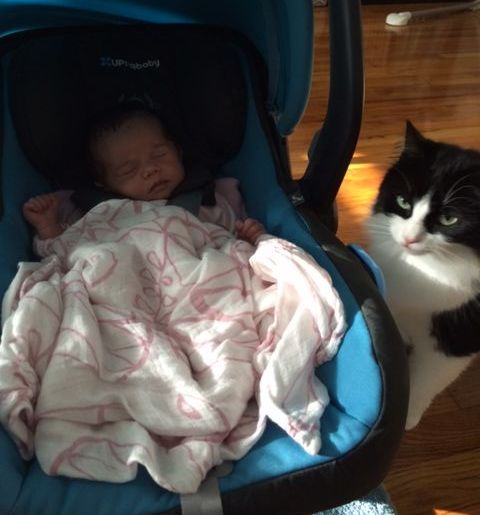 Â Everyone in Ericka’s family is taking turns babysitting newborn Charlotte, including Scout! This photo is a little dark, but if you look carefully, you’ll see Charlotte’s face in the shadow of her carrier. As we saw in our last episode, there isn’t much difference between a baby carrier and a cat carrier, so we’ll forgive Scout if she gets confused.

Felix’s misadventures (4-23 to 4-29-1934) with the crazy bulldog continue as he gets chased through a circus tent and takes refuge in Mr. Dooit’s refrigerator. Felix remains offstage in cold storage as the bulldog chases Hilda the maid and Mr. Dooit in the last two daily strips (4-27 and 4-28). he’ll probably be a block of ice next time. In the Sunday, Felix continues his fall from the moon begun last post, and becomes the mascot of a couple of airplane pilots. You see, Felix’s fall was broken by their rudder and the cat’s weight on the back end of the plane enabled it to clear a dangerous mountain range. So Otto segues from fantasy to “reality” in Felix’s world. By the way, the hand shadow episode of “Funny Films” above, reminds me of the hand shadows created by the baby in the cartoon “Sure-Locked Homes”, from 1928.

Â Myrtle (1-26 to 1-31-1948) spends a week doing barber shop gags. It seems Freddie (Myrtle’s Dad) needs a haircut. I love the bucket gag in the 1-26 and the 1-31 has a nice little inside reference as the Barber tells Freddie, “I wouldn’t do this for you, only I want my picture in the comics!” Charming drawings and imaginative gags, that’s Dudley Fisher. 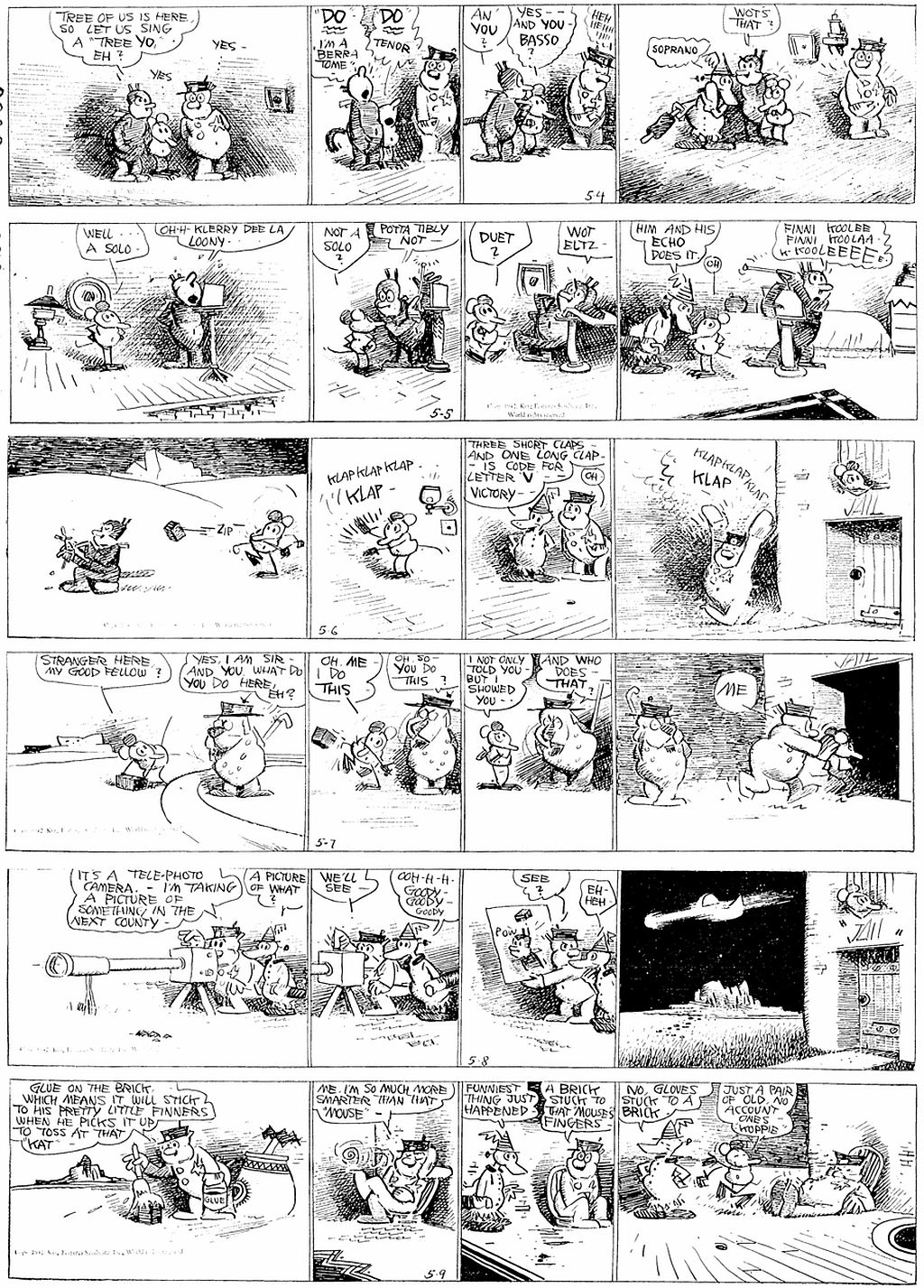 Â In Krazy, (5-4 to 5-9-1942) it’s revealed in the 5-4 that Offissa Pupp is a Soprano, after Krazy’s “Berra-tone”, and Ignatz’s tenor. The balance of the strips are about brick-throwing, Ignatz foils Pupp’s Katzenjammer style use of glue on the brick with a pair of old, no-account gloves on his spindly hands. If you look at the foregrounds of the 5-5 and 5-9, you will notice floorboards and rugs in the Coconino desert. My theory is that’s what George Herriman thought his comic strip panels to be; little stage sets where the characters could hurl heavy objects at each other and trade bon mots in Kat Langwitch. 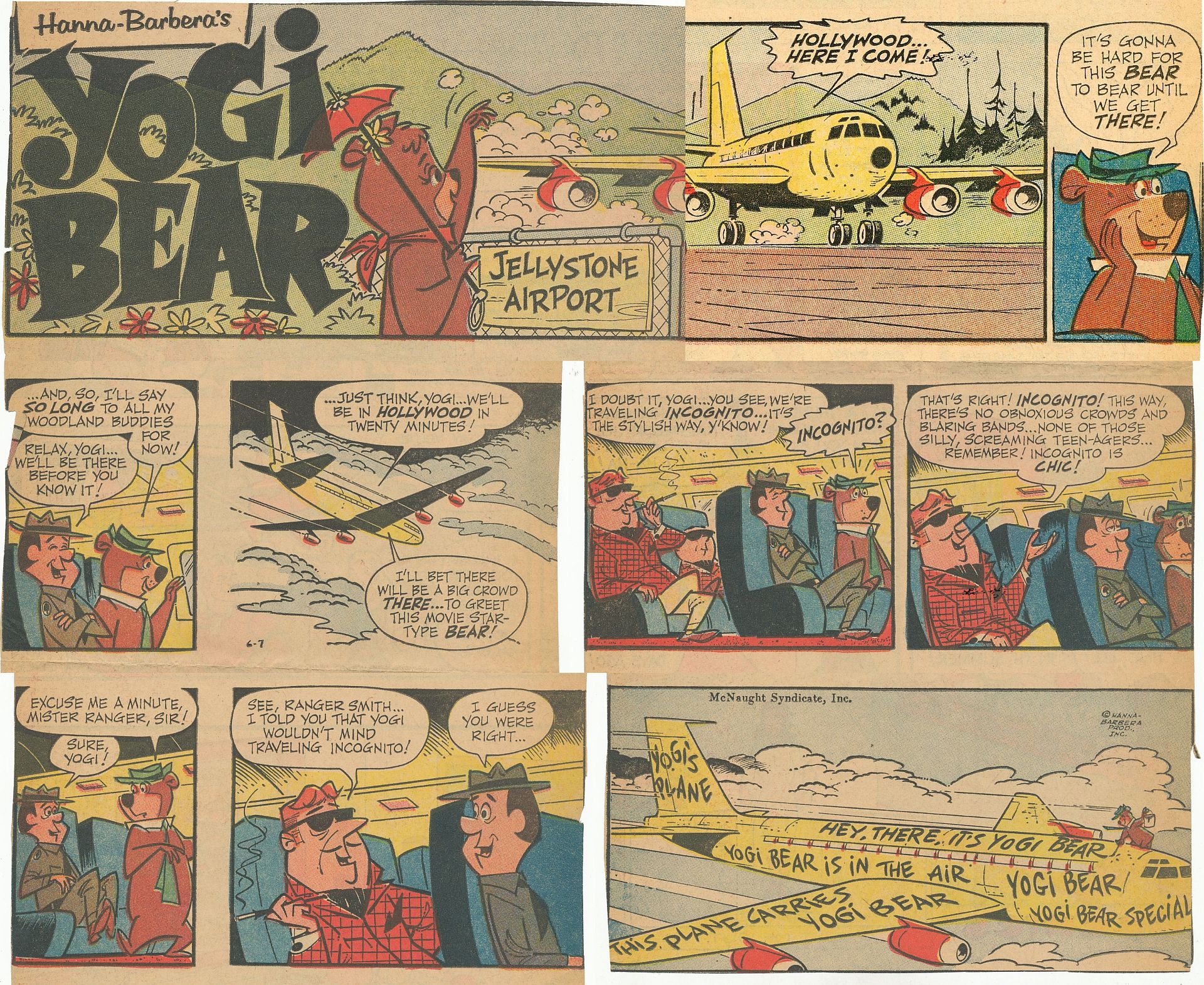 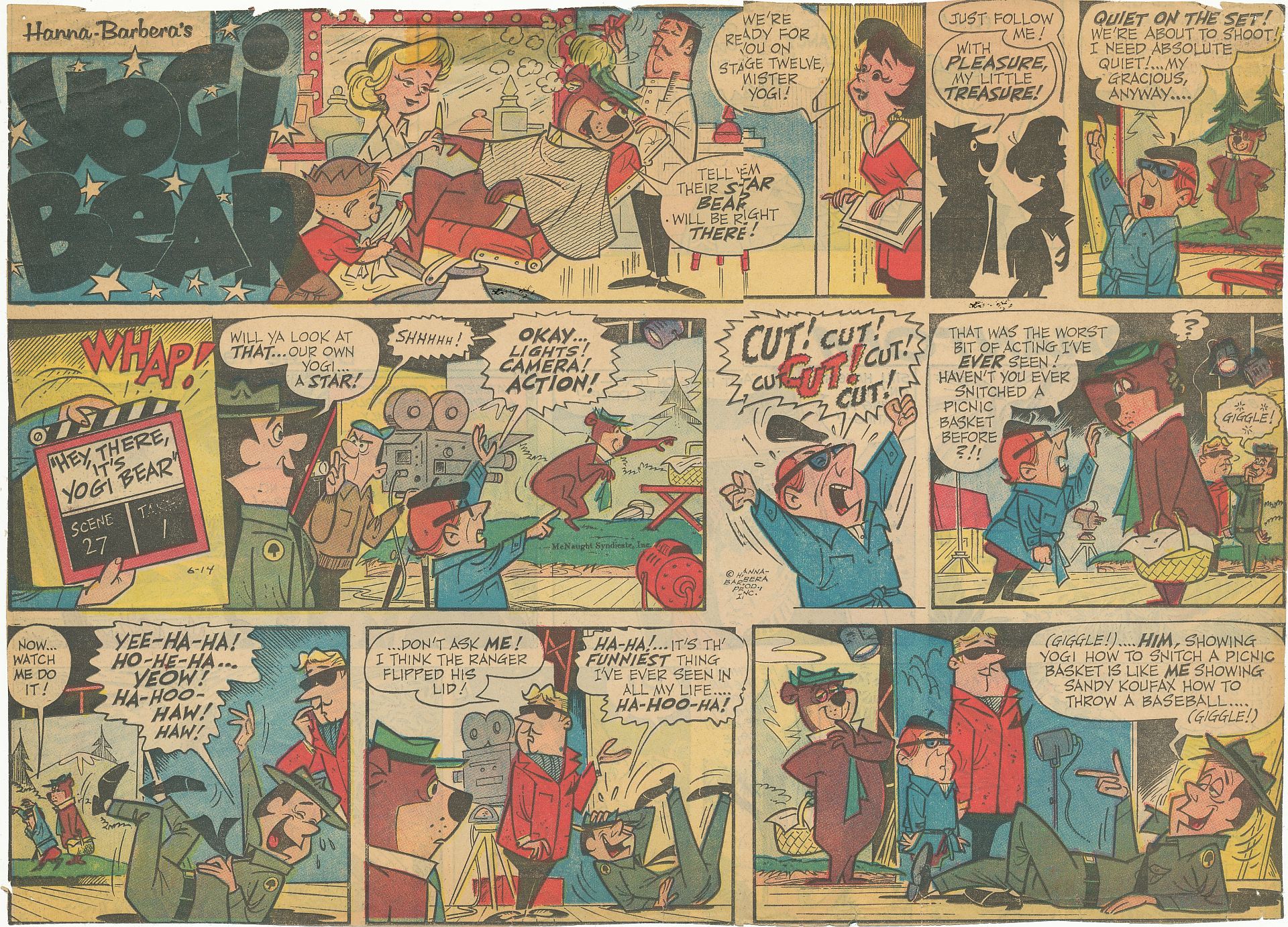 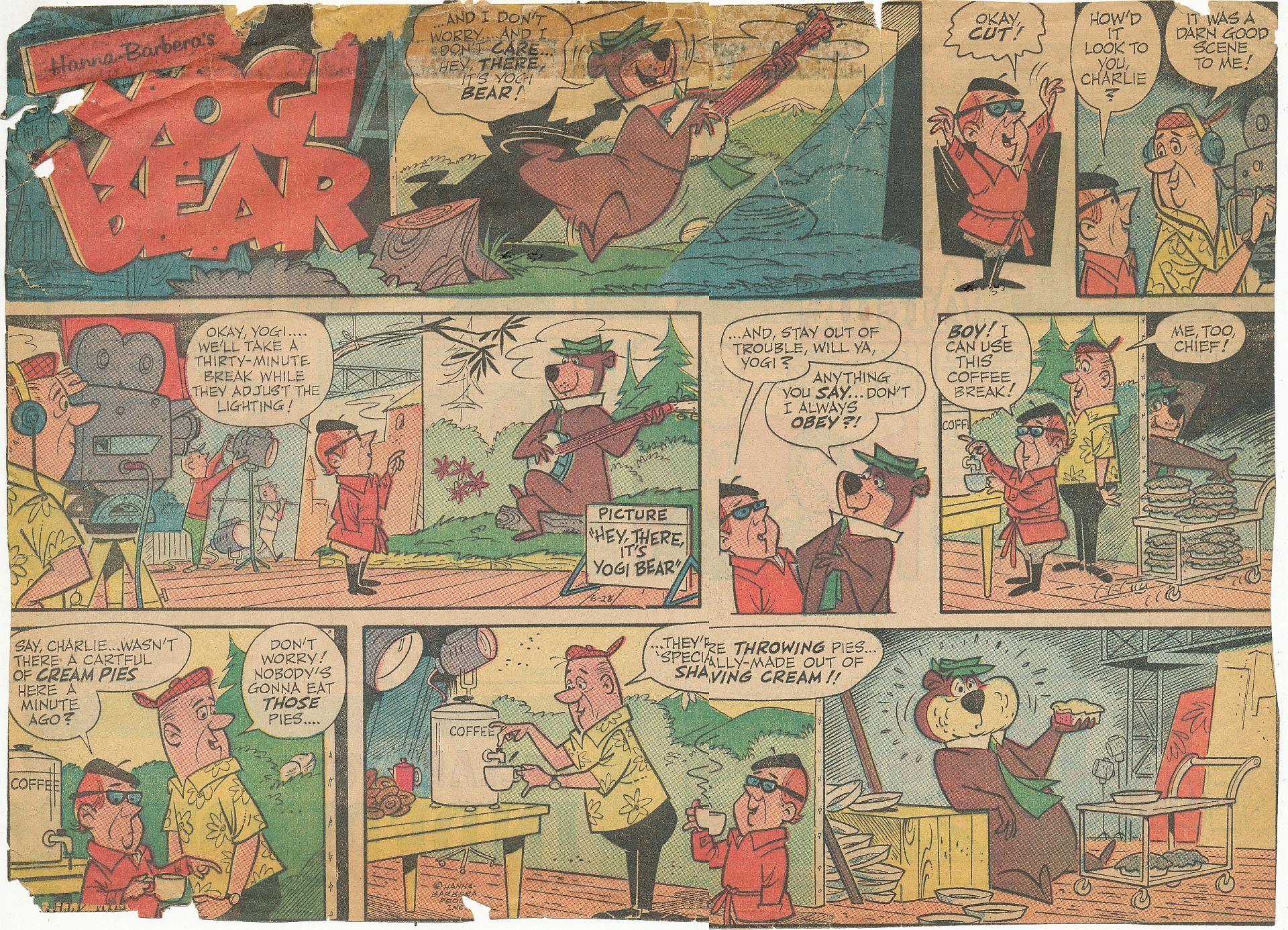 The Yogi Bear Sunday pages are from June, 1964 this time. I got access to another newspaper which carried the half-page version of the comic. I had to do a little computer paste-up work to make a facsimile half-page out of the 6-7. It was a tall, narrow strip in the newspaper I clipped it from. 3 out of the 4 pages are gags about the newly released Yogi Feature Cartoon, “Hey There, It’s Yogi Bear!” The 6-21 is the only third page strip, (click on thumbnail to enlarge) and equates the music of The Beatles with skunks. All the artwork, including the logo designs, are by Harvey Eisenberg. I often wondered why the art in the TV shows and cartoons was never as pleasing as the Sunday comic page.Â It was a case of too many cartoonists spoiling the Bear,Â Mr. EisenbergÂ had the Sunday page mostly to himself in 1964, and few artists drew the Hanna-Barbera characters as well as Harvey.

Two of my seven readers, Thad and Charles, wrote in to ask about cels for sale from our cartoon: “Some Other Cat”. They are all for sale, except for the original backgrounds which Greg Ford is keeping. Each cel comes with a reproduction background, original pencil drawing where available, and a DVDr of the cartoon. The package sells for $80.00 to $100.00, depending on the whim of we who sell the artwork. I’ll try to get some thumbnail images of the cels available now on the blog page very soon. 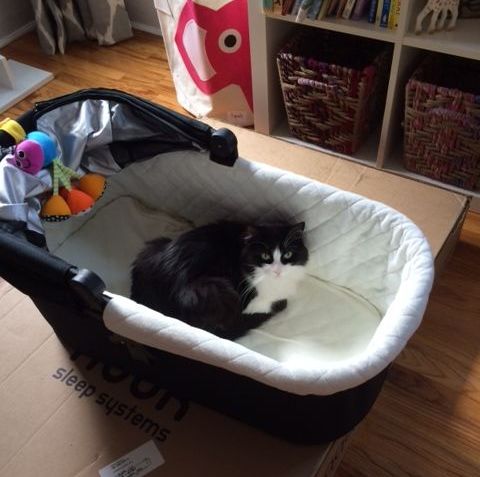 Â It looks like Scout wants some of the attention that baby Charlotte gets as she takes over the basket seen in the last post’s photo. Photo by Ericka Stockwell.

Â That’s singer and entertainer Janet Klein on the right, and me on the left on the stage of the Steve Allen Theater in Hollywood. Janet is a devotee and admirer of the popular music of the early 20th century, she channels Helen Kane, Ruth Etting, Lyda Roberti, Annette Henshaw and Connie Boswell,Â then puts her own appealing personality and performing ability into her act as well. Janet borrows 16mm cartoons from me to show before the program begins, Jerry Beck mans the projector:

Â Janet has started a new segment of her show at the Steve Allen Theater on Hollywood Blvd. each month, namely Retro Toons! The idea is to find contemporary animated shorts that have an early 20th century sensibility, using the music of those times. She invited Itza and his cartoons to join Janet Klein and her Parlor Boys on May first, and she ran “Some Other Cat”. It was one of the best experiences Itza’s had yet! The musicians (Parlor Boys)Â in Janet’s orchestra really enjoyed the cartoon for all the musical ideas in it, they appreciated the rhythm thatÂ it was synced to, and so did the small audience that attended that night. It’s so great to hear the laughter of people you don’t know responding to a cartoon that’s so close to your heart. I still haven’t recovered from the warm reception that “Some Other Cat” was afforded, and to be part of such a charming, sparkling evening was an experience Itza and I will never forget. Thanks Janet! Thanks Jerry! If you’ve never seen Janet performing such songs as “Who’s That Knockin’ At My Door?” and “College Rhythm”, come on down to the next show, you’ll be glad you did. 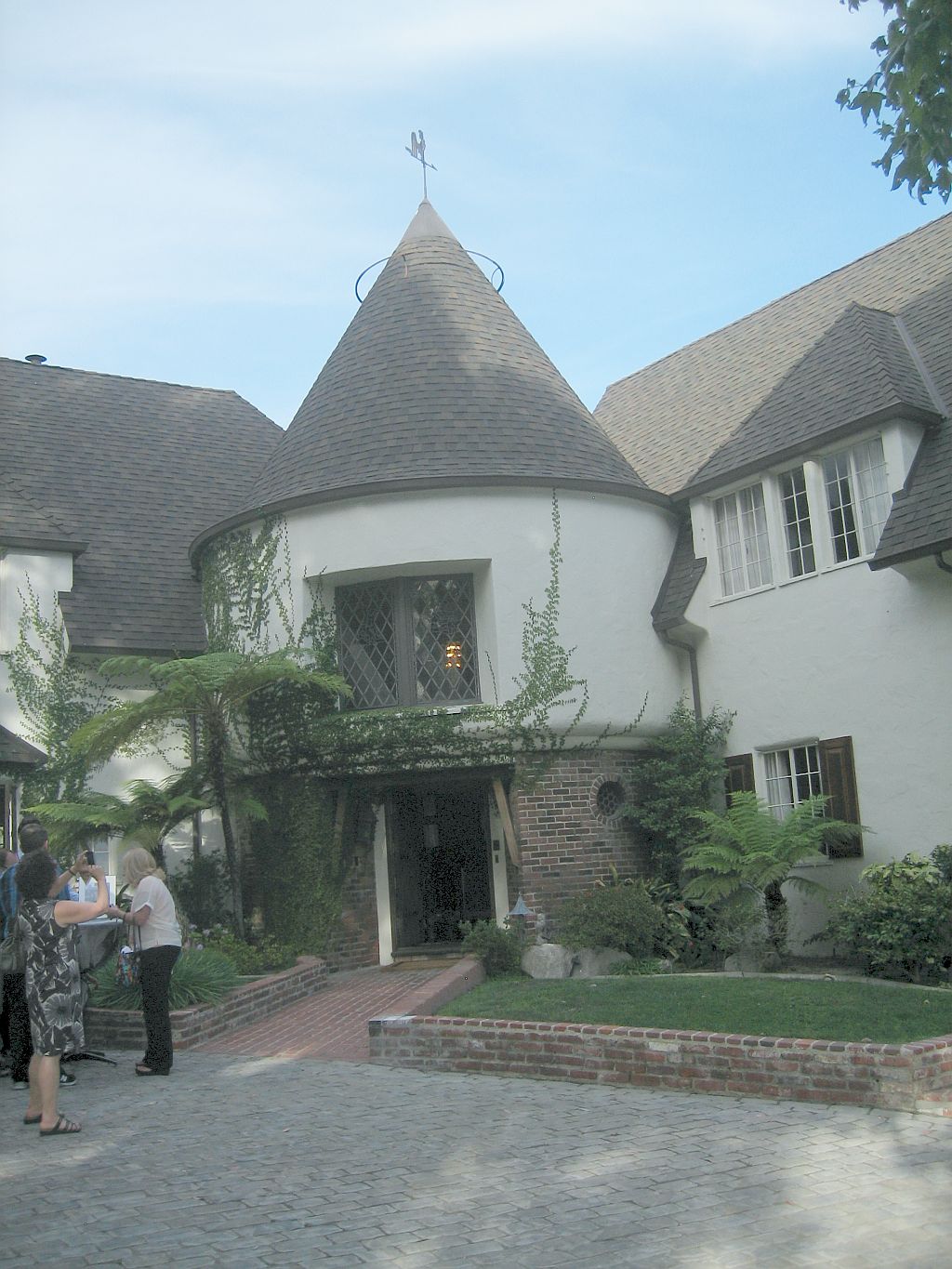 Â On May 10th, I found myself at a place I’d only heard about and seen pictures of, but never hoped to visit, Walt Disney’s home in Los Feliz, CA. As part of the Hyperion Historical Alliance’s annual Disney History Luncheon, our group was invited to a tour of the vintageÂ Disney sites around the Los Feliz district near Hyperion Avenue. We parked our cars at one of the most historic movie studios in the world, the ABC studios on Prospect and Talmadge. That’s where D.W. Griffith filmed his epic “Intolerance” in 1916! Our van left fromÂ there, and we saw the Disney buildings on Kingswell and Lyric Ave. (where “Plane Crazy” was made), then went up to the house Walt built for his family in 1932. That’s the front door in the photo above, with that wonderful tower incorporated into the design. 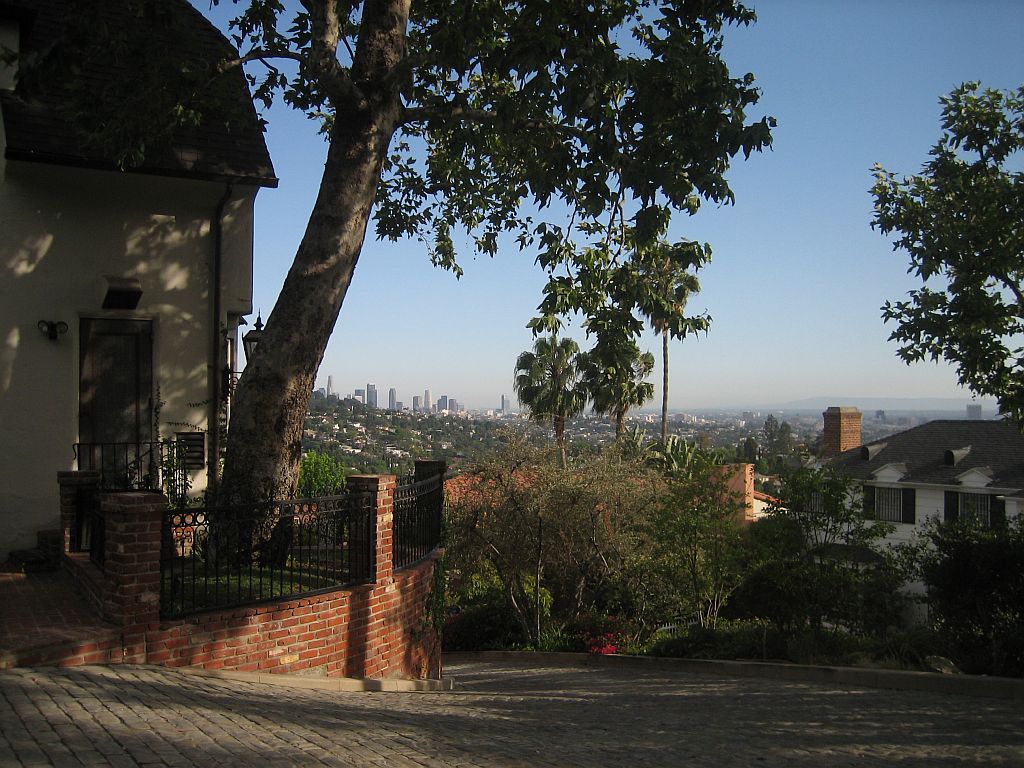 Â Here’s a shot of the cobblestone driveway and the view overlooking downtown Los Angeles. If you can take the skyscrapers out, and just leave City Hall in, that’s the view that Walt, Lillian and family had in those golden days. To be at that house was the realization of a dream for me. When I first moved to Los Angeles in 1968, they were demolishing the last of the old Disney studio which stood at 2719 Hyperion Ave. I drove to the site, expecting to see the crumpled remains of the famous “Mickey Mouse and Silly Symphony Cartoons” neon sign. All that I saw were the crumpled remains of a lot of brick buildings and a big hole in the ground. I saved one of the bricks, but I no longer have it. So the entire old neighborhood, including Marshall High and the “Snow White” apartments on Griffith Park Blvd. is magical to me. As I sat in the backyard near Walt’s pool, I was delighted at the sight of the little house he built for Diane and Sharon which mimics the style of the big house, which is sort of an English Manor house design. The interior had very high ceilings, several of the rooms had hand-painted decorations on the ceilings, and small stained glass panels with English heraldry and armorÂ were in most of the leaded windows throughout the house. The house originally was on 3 acres of land, so they had a lot of privacy and a real feeling of serenity on top of that hill. The projection room is still there, but no film projectors are left, digital took over that booth as well. Playing on the system was footage of Walt swimming in his pool with Diane and Sharon, and scenes of swimming parties at some of the neighbor’s pools. Part of the original trailer for “Snow White” was included, and we heard Walt’s voice introducing the Dwarfs. One of the invited folks remarked how ethereal it was to hear Walt speaking in the house where he lived with his family so many years ago. On display elsewhere inside we saw many vintage photos of Walt posing on the circular staircase that’s inside that tower in the first photo. Lillian’s gardens are still there, along the side of the house and extending down a very steep slope with a little BBQ pit far below the residence. The current owners of the home are Disney collectors and had a nice collection of Disney posters and animation art on the walls. It makes you wonder what Walt had up on the walls of that house. ThisÂ  proved to beÂ another hard-to-forget experience, two in one week with the Janet Klein show. As I sat on the steps in the backyard looking at Walt’s view of downtown, I couldn’t help feeling a little bit of the serenity and class of early Hollywood, as Walt must have experienced it. Thanks to Mike Van Eaton and Didier Ghez, I was there!

Â Here from 4-16 to 4-22-1934, are the Felix strips by Otto Messmer. This week Danny Dooit and his brother Chip play baseball in the rain and catch cold. Felix can’t play with them in that condition, so he leaves the house for awhile and tries to make friends with a Messmer bulldog. I love the poses of the bulldog in the last two panels of the 4-20, as the dog reacts to the eel he grabbed instead of Felix’s tail. In the Sunday page, Felix arrives on the moon, but finds that it’s just a rim of scraps that crumble all away, leaving him hurtling through space! 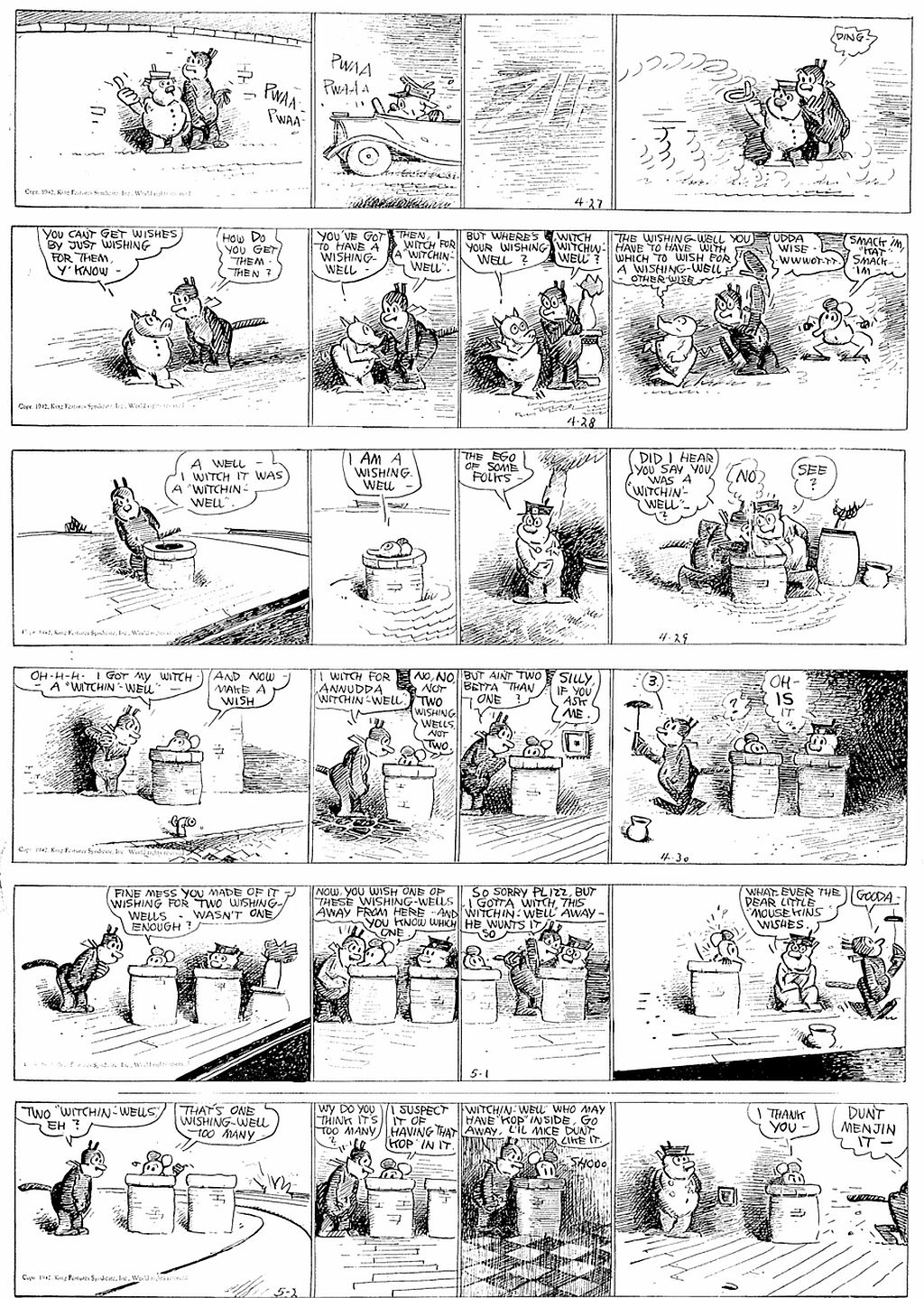 Â Krazy is from 4-27 to 5-2-42 this time and nearly the whole week’s worth of strips is about wishing wells, or in Kat Langwitch: “Witchin’ Wells”. The pig with the buttons down his front in the 4-28 is a character that Herriman didn’t use very often, he seems to be a paragon of logic in the very non-logical Coconino County. He informs Krazy that he can’t get a wishing well to wish wishes in if he doesn’t already have a Well to make the wish WITH! Garge has fun with two wells side by side, one of which seems to be occupied by Offissa Pupp, who wished for him?

Â Myrtle is from 1-19 to 1-25-1948. Myrtle figures that her dog Bingo is 45 years old in dog years, and deserves Senior rights. Bingo takes over Freddie’s chair in the 1-21 because he’s older than Freddie! In the 1-24, Bingo is told to go outside by Myrtle using dog talk to communicate with him. In the last panel, Bingo reveals that he can’t understand a word of human talk, but can read a hand pointing the way to the outdoors. Some of Freddie’s business worries are touched upon in the Sunday page.