Back to the “Old Stuff”

Comments Off on Back to the “Old Stuff” 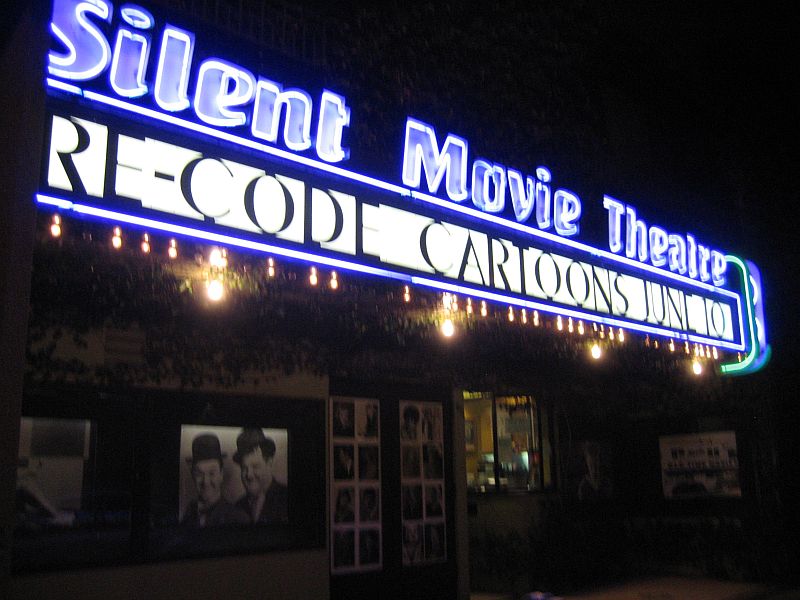 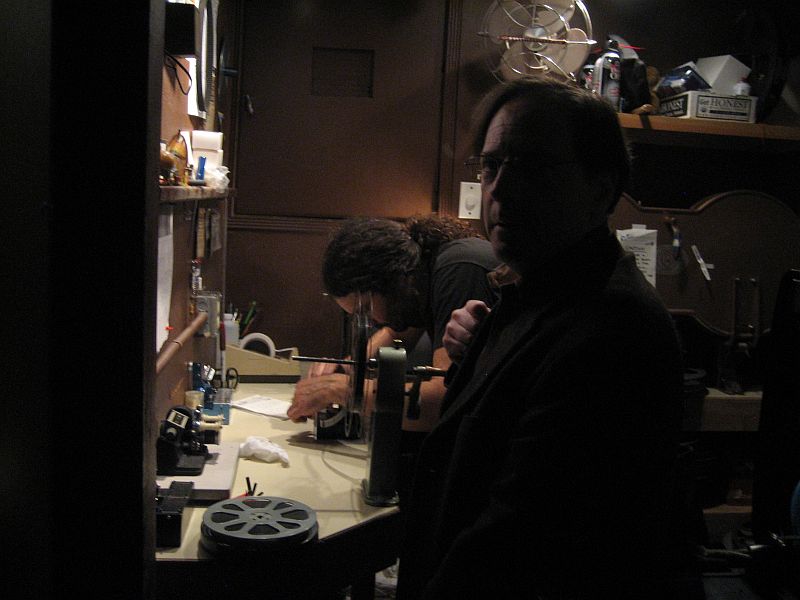 Whelp, I didn’t receive any comments on my wife’s “Mangy and the Worm” page. Those who wish to continue to see new or unpublished comics continue, please let me know at molasses@earthlink.net. Last Tuesday night, Jerry Beck did a show of “Pre-Code” (actually pre-code ENFORCEMENT) cartoons at the old Silent Movie Theater on Fairfax in West Hollywood.  I hadn’t been in this picture palace for over 30 years! The current management, “Cinefamily” has re-done her inside and out, with a new marquee (see photos above), new Simplex and Elmo projectors in the booth (including a (gulp) digital projector), new photos on the wall, new popcorn machine, in summary, a nice place to watch old movies in. The theater seats about 100, in brand-new seats with cushions (!) and a couple of soft huge leather couches in front. A Hammond organ and a baby grand piano are on either side of the screen for the real silent movie evenings. The Silent Movie is now a rep house, that’s why we could run sound cartoons last Tues. We ran THE BEER PARADE, SOUTHERN EXPOSURE and BETTY BOOP’S PENTHOUSE in 35mm and several early 1930s cartoons in 16mm as well, such as ROOM RUNNERS, I’LL BE GLAD WHEN YOU’RE DEAD YOU RASCAL YOU, BOOP OOP A DOOP, PLANE DUMB, BIMBO’S INITIATION, SINKIN’ IN THE BATHTUB, YOU DON’T KNOW WHAT YOU’RE DOIN’ and finishing up with SWING WEDDING in color. There were so many people that they had to do a second show to accommodate the overflow crowd. The “overflows” had to wait more than two hours to see their show. The presentation was good, with good lumens and good sound. The audience reactions were very good, they laughed a lot,  applauded some of their favorite cartoons and didn’t gasp and cry at some of the racial sterotypes and comedy, like some contemporary audiences will do. Maybe the Silent Movie will host another cartoon program sometime featuring (maybe) SILENT CARTOONS! I think a good program could be created showing the influence of silent comedy on the animated cartoon, both silent and sound. Think about that, Jerry! (By the way, that’s J. Beck himself in the photo up there with the projectionist cutting 16mm reels together.) The Silent has come a long way since the hard wooden bleachers and the one old 16mm projector (under-lit) that I remember. It’s wonderful that the Cinefamily people have chosen to renovate the Silent Movie, rather than sell it for Condos. Come out and support them if you’re local!

This week’s comics are L’il Abner from 4/16/1973 to 4/21. Barney Oldgoat dies from too much partying, but reveals to Bullmoose that Pappy Yokum owns a copy of “Corporal Crock” number one! Wait ’til you see the General’s reaction to that! In MARVELOUS MIKE, from 7/23/1956 to 7/28, Mike and Merrie foil the “Adoption Racketeers”. I wonder if there really were such operators in the mid-1950s, anybody know? To finish up, we have the next two pages of “There Auto Be A Law” from Felix #4 by Jim Tyer. The jokes about women drivers seem lifted from Cap. Billy’s Whiz Bang, but the drawings are very funny. I love the splash panel with Kitty’s car chasing dogs, funny chickens and running pedestrians up a telephone pole. This story reminds me of the Popeye cartoon, “Women Hadn’t Oughta Drive”, which I believe Tyer DIDN’T work on. I’m posting early because Cathy and I will be plein air painting a lot next week in San Clemente and I won’t have time to blog. She has a “quick draw” (actually a quick PAINT) to do on Saturday the 14th, for which she is already keyed up. I love the ocean and am looking forward to being with her in the lovely town of San Clemente, near San Juan Capistrano. I’ll be bringing you more material both old and new (?) soon!