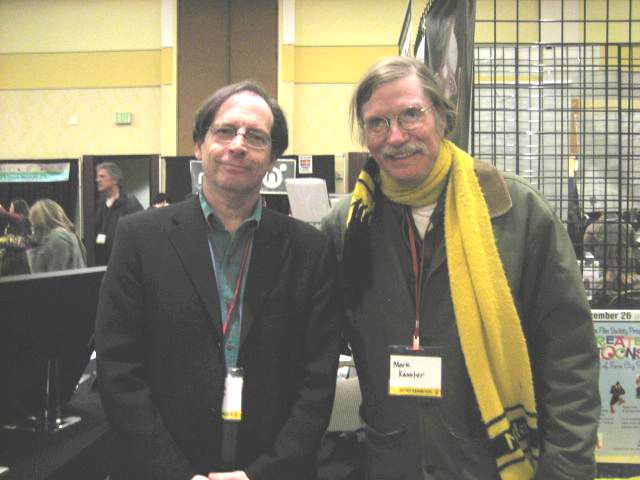 Presenting Col. Shuffle and Aces Wild at the CTN Expo, the weekend of Nov. 19-21, Burbank, Ca., after a three day poker game (That’s Jerry Beck on the left, and yours truly on the right). I was just about ready to go home when this was taken; I actually sold four cels from “It’s ‘The Cat'” to friends and strangers at the mighty Expo. Jerry had copies of his books on “Madagascar 2” and “The 100 Greatest Looney Tunes” for sale, which he autographed. In addition to the cels, I sold some scrap film and some Little Orphan Annie collections, one of which was bought by Moebius (Jean Giraud), famous French cartoonist. He watched “It’s ‘The Cat'” on my little monitor and enjoyed it quite a bit. I did not anticipate that this year’s Expo would be an even bigger hit than last year’s. The crowds were really lined up for all the panels and programs. I couldn’t go to any of them, because I was just trying to do business. Speaking of business, you can still buy cels from “It’s ‘The Cat'” anytime, free shipping and DVD included, just go to www.itsthecat.com, and go into the Gallery section. Click on Film Art, and you will be in production cel heaven. While you are there, consider giving something original for the Holidays! Help out my producer Greg Ford, and maybe get “There Must Be Some Other Cat” out a few days sooner. A special thanks to Milton Knight, for contributing to the Greg Ford Fire Fund. You’re now an Ailurophile!

Otto Messmer’s expertise in drawing all kinds of cartoon cats is in evidence in the dailies this time (3-9 to 3-14-1936) but Fooy Tu Yu tricks Felix away from the pound and out of the diamond and throws him into a safe! In the 3-15 Sunday page, Felix is still stuck in the sixth century where even the food is in armor.

Krazy is from 8-26 to 8-31-1940 this time. More puns and mixed associations this week, due to Krazy’s “Kat Langwitch” and twisty reasoning. I love the cow in the 8-30, and Herriman’s staging in the last panel of the 8-31; Ignatz standing on a platform just below the lip of the plateau, as Pupp laments the uselessness of his jail. 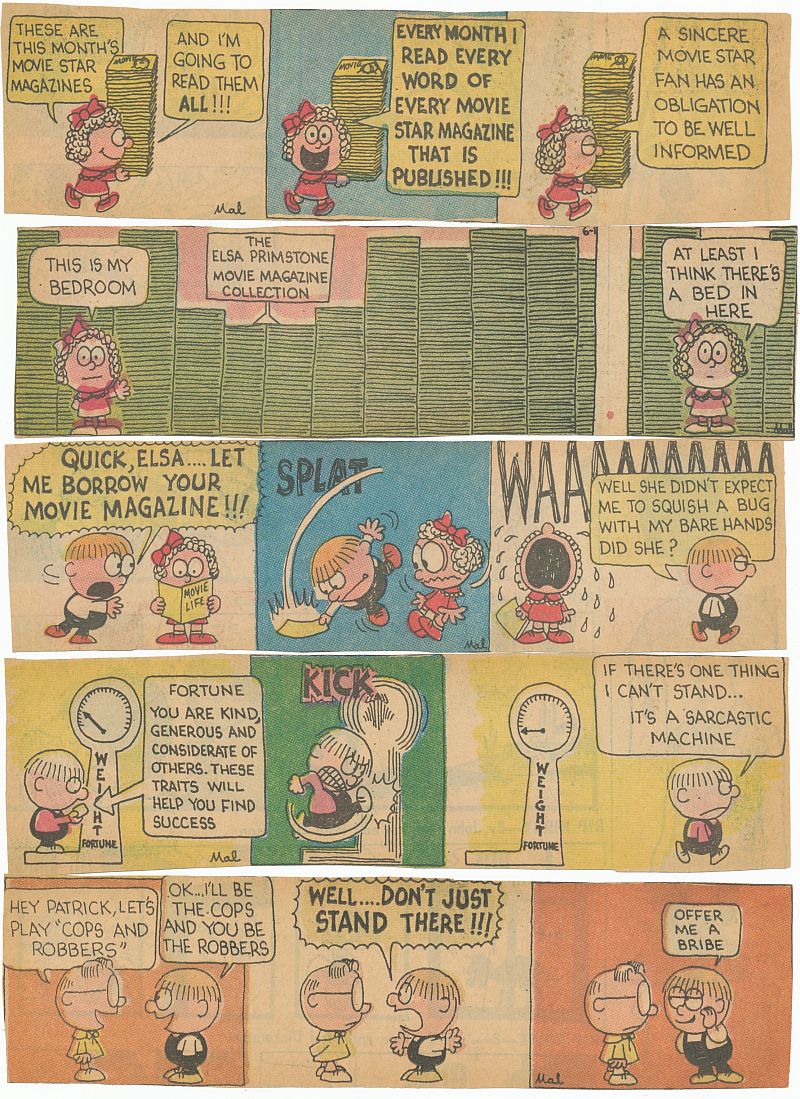 Patrick is from approximately 5-31 to 6-4-1966 this time. We learn that Elsa’s last name is “Primstone”, and that she collects movie magazines. Of course, Patrick has no scruples about smashing a bug with one of them. For the next several batches of strips, there will be educated guesses about the exact dates of a few of them, since I didn’t write the info down when I clipped them from the St. Louis Post-Dispatch, and Dad was a little more relaxed about buying every issue of the paper in the summer time. I’m not even sure if these comics are from 1966 or not, they may be a couple of years earlier than that. I met two of my readers at the Expo who really seem to like Patrick, and were a little bit amazed that I clipped them so carefully in my childhood. Comic strips really had me dazzled in those days, they were free (for me), and I really looked forward to each day’s installments of the stories, especially L’il Abner, which also ran in the Post-Dispatch. I’m very happy to have readers who come back to read the strips each post. It’s a little harder to post as frequently over the holidays, but I’ll try!