Get these DVDs NOW! 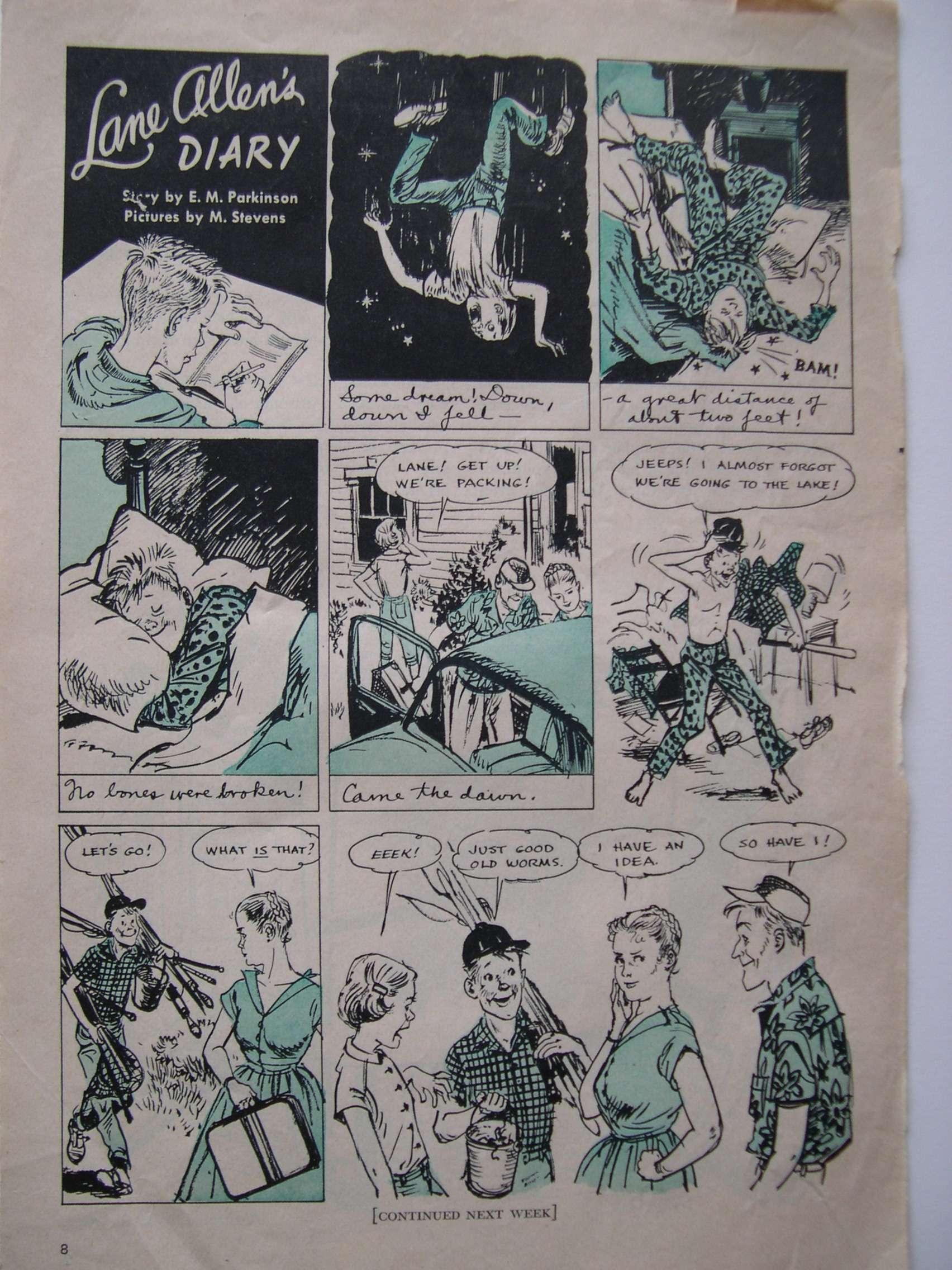 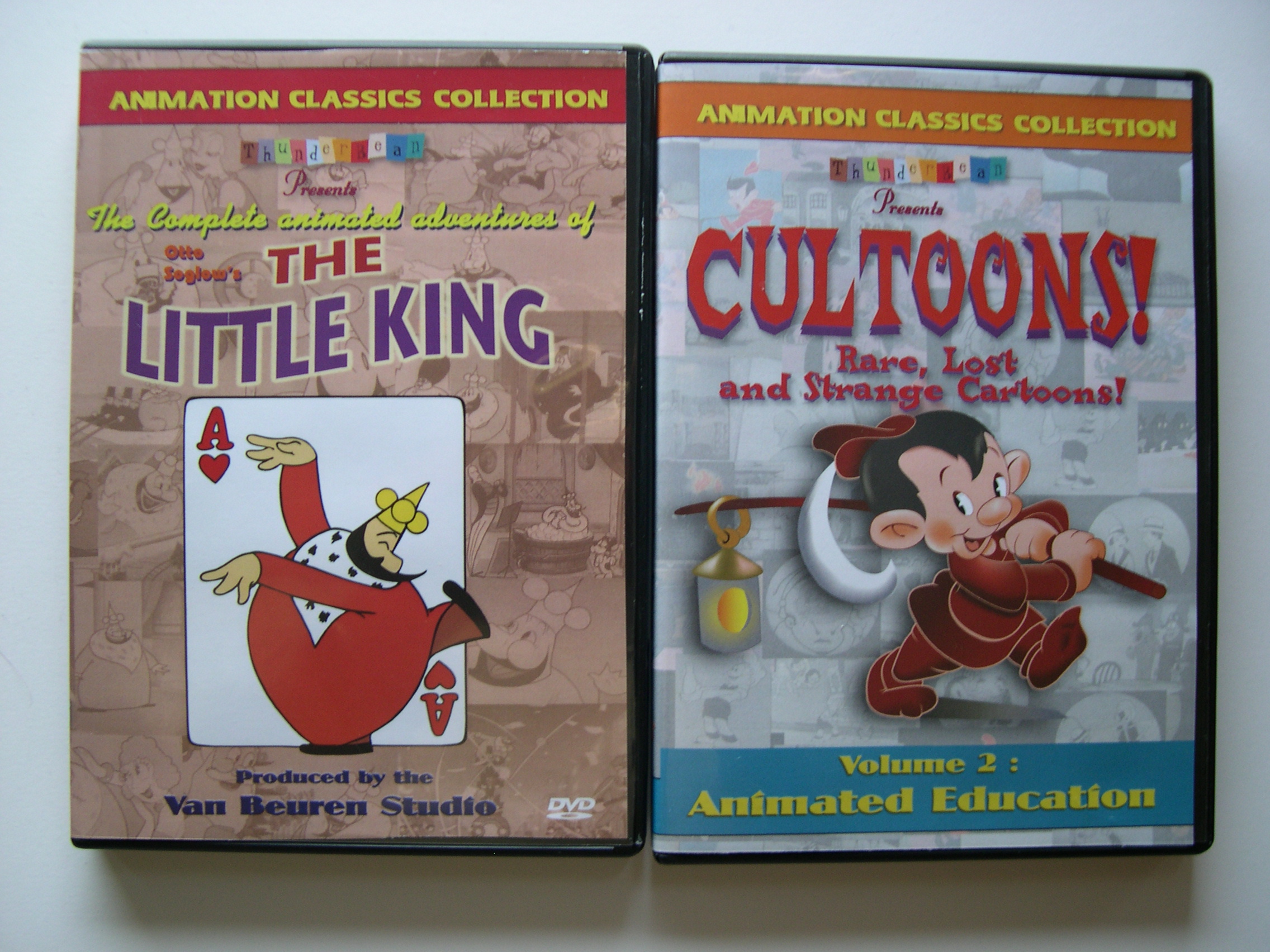 Alright, cartoon lovers! Go to www.thunderbeananimation.comand order copies of “The Little King” and “Cultoons Volume 2: Animated Education” right NOW! Got em? Good! My friend Steve Stanchfield put these together, and they are a true labor of love. Who thinks much about Otto Soglow’s merry monarch these days? You can see 1940s Sunday Little King pages on line at dailyink.com, but the animated cartoons? Now Steve makes it easy for you to see all 10 Van  Beuren “Kings” uncut and restored with the original titles (wherever possible), plus the two “Sentinel Louey” Cartoons and the Max Fleischer “Betty Boop and The Little King” thrown in as a bonus! Wait until you see and hear all the text extras that Milton Knight and Chris Buchman put together for this DVD, including a recording of the tune “Zombie”, which is heard in “On the Pan” and in my favorite Van Beuren Aesop Sound Fable: “Rough On Rats”. Milton wrote a wonderful essay on Jim Tyer that explains just why the design in his animation transcends the thirties and was contemporary all the way into the late 1950s! Milton, you should write Jim’s biography. The Little King was one of my childhood favorites, not because his cartoons were funny, but because they were scary! Jim’s animation of the catacombs that scare the fat lady tourist in “Art for Art’s Sake”, are an indelible scary delight, as is the “mad bomber” in “The Fatal Note”. Jim animated a lot of the bomber’s acting scenes, as well as the crazy chase where the bomber’s arms rotate like pinwheels as he shoots at the King.  Wait until you see “Marching Along”, essentially a commercial for the NRA, a true time capsule which shows how volatile commodity investing was (and still is). This one was not on TV that I remember, well worth buying the DVD to get!

Cultoons Volume 2 features a lot of obscure and rare educational cartoons from the 1930s to the 1950s. It includes “A Desert Dilemma” bu Cy Young the great Disney special effects animator (audio commentary by Milton Knight, Steve Worth and Jerry Beck), “See How They Won”, an Ub Iwerks cartoon featuring The Microbe Army for Boots Chemists in London, “Finding His Voice” by Max Fleischer and “The Family Album” by Paul Terry, both made for Western Electric. “The Family Album” is actually a sequel to “Finding His Voice”, so the grouping is appropriate and long overdue. Steve Worth does audio commentary for “Voice”. Also on the DVD you will find a very early John Hubley Navy UPA production: “Swab Your Choppers”, and a beautiful color print of Hugh Harman’s “Winky the Watchman”. “Winky” is the little guy with the lantern on the box cover drawn by the late Brenda Bailey, to whom the DVD is dedicated. She did a great job in drawing Winky, he looks very appealing. Pinto Colvig does his voice. I did the audio commentary on this short, with info culled from Hugh Harman’s papers. I made a really embarrassing mistake, not in the cartoon notes, but in the info I supplied on live action films. See if you can spot it. Steve even threw in an extra audio reminiscence of Hugh that I recorded for the DVD.

Steve is a tireless collector of the rare and the obscure in vintage animation, so we who love this material have an obligation to support him! Buy several copies and give them away to friends, relatives, or the next person you meet on the street! Donate a copy to your local public library! Let’s make these cartoons FAMOUS! Then, with the profits (?), Steve can do more DVDs of  the unusual and forgotten in cartoon history. I has spoken!

Also in today’s blog is the next installment of “Lane Allen’s Diary”, which I saved as a kid from some religious weekly or other. The strip is not really religious, but I think it’s almost as good in it’s own way as Walt Kelly’s “Our Gang” comics. Just look at the attitudes in the last panel. The mom and dad’s poses tell us so clearly what their attitudes are toward Lane and his fishing trip with “good ol’ worms”. I love the drawing in this strip, a combination of illustration and cartooning. The facial expressions are refreshing to look at. To repeat from previous posts, if any of ya’ll know anything about this strip, please let me know!