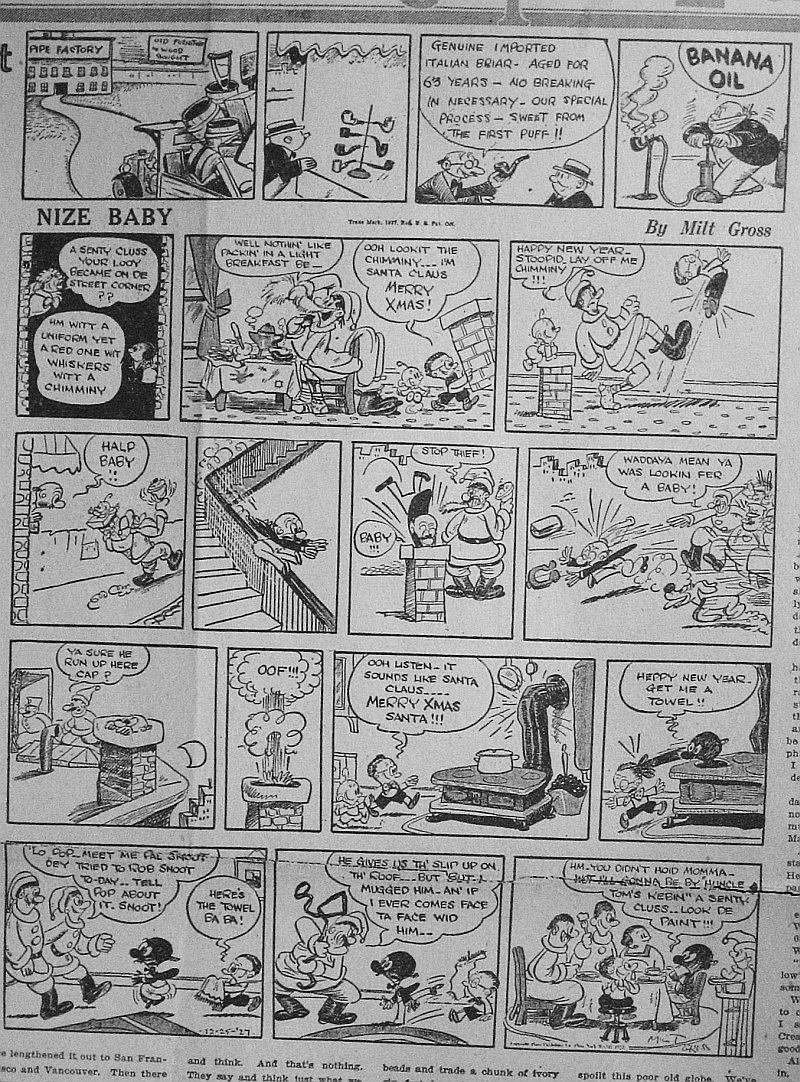 Howdy Readers! One of the loyal ones, Al, requested more “Nize Baby” strips. Alas, I only have one left, but it’s appropriate for this time of year, originally ran 12-25-1927. Papa is in trouble after trying to rescue his baby from an artificial chimney.  After Papa goes through a sooty stove pipe, he is an “Huncle Tom’s Kebin” Santa, so he won’t be recognized and beaten up by Looey’s pal and ersatz Santa, Shoot. Shoot thinks that Papa was trying to rob his “Selvation Harmy” chimney! Henjoy this one, from the Los Angeles Examiner and the manic pen of Milt Gross.

Felix this week is from 7-20 to 7-26-1936. The Dooit’s butler, Snobbs, is still trying to mind Mrs. Boo’s baby. I like the 7/24 See-Saw gag, as Felix laughs uproariously at Snobb’s attempt to balance his weight against the baby’s. The Sunday page from 7/26 is beautifully drawn, Uncle Minus’s devining rod finds gold collar buttons, saving Felix’s home life once again. Bobby Dazzler’s kid brother in the top strip, looks like “Vontzy” from the Charles Mintz Scrappy cartoons!

Krazy this week is from 1-8 to 1-13-1940. Krazy discusses his musical ancestry in the 1/9, branching out to Kat Whiskas in the 1-10. If you’ve ever owned a crystal radio set, you’ll know what kind of “Cat Whisker” Krazy is referring to. It’s a very thin wire that moves over the tightly coiled wire that is the heart of the radio, and tunes in the stations by touching different parts of the coil. By the way, what happened to Offissa Pupp’s buttons and star in the last panel of 1/9? Were his ancestors so “hot” that the tin ornaments melted off his chest? I’ll end the post this time with another column from 8-1-1928 illustrated by Webb Smith. I’ll try to post again before the sleigh touches down!