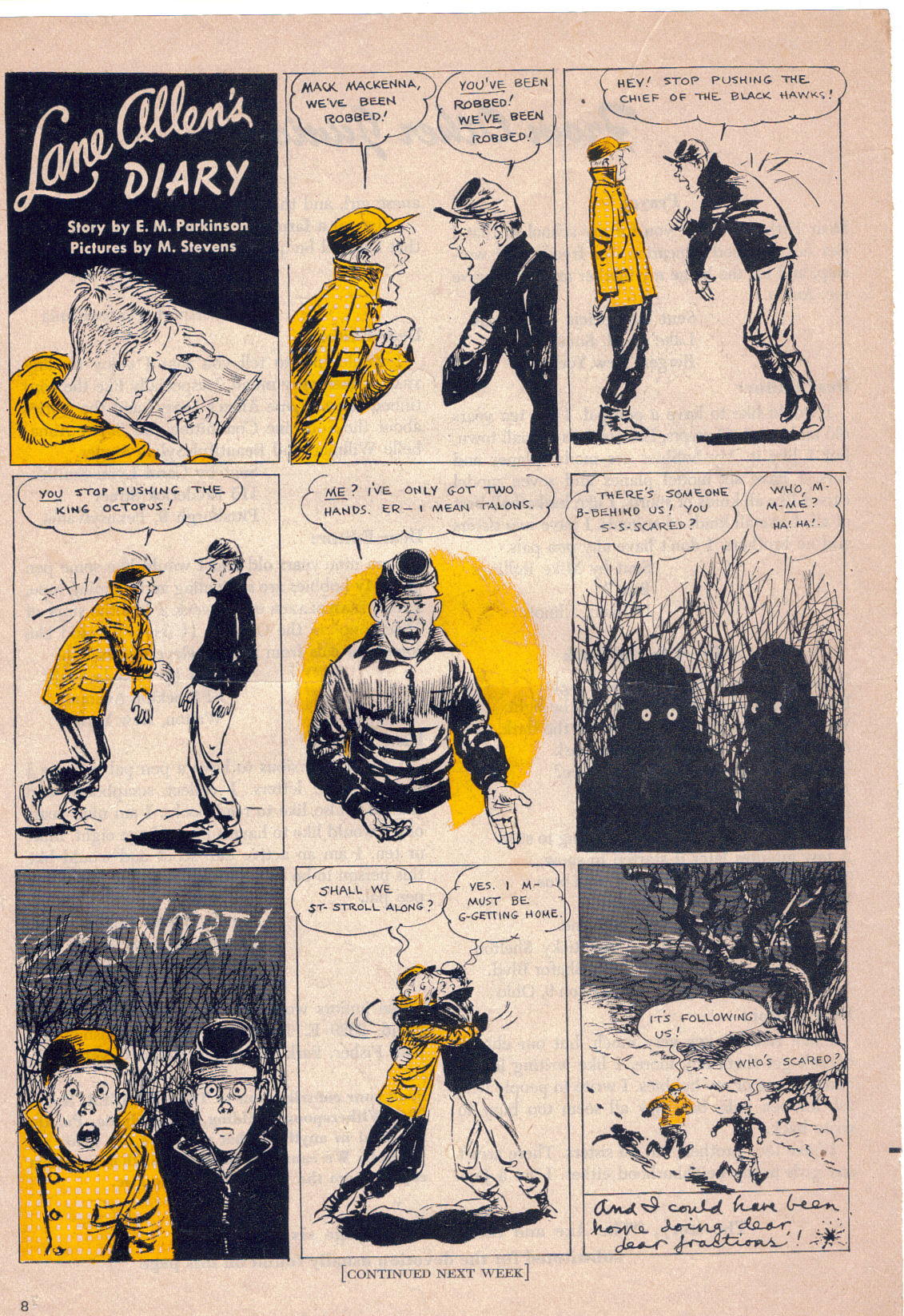 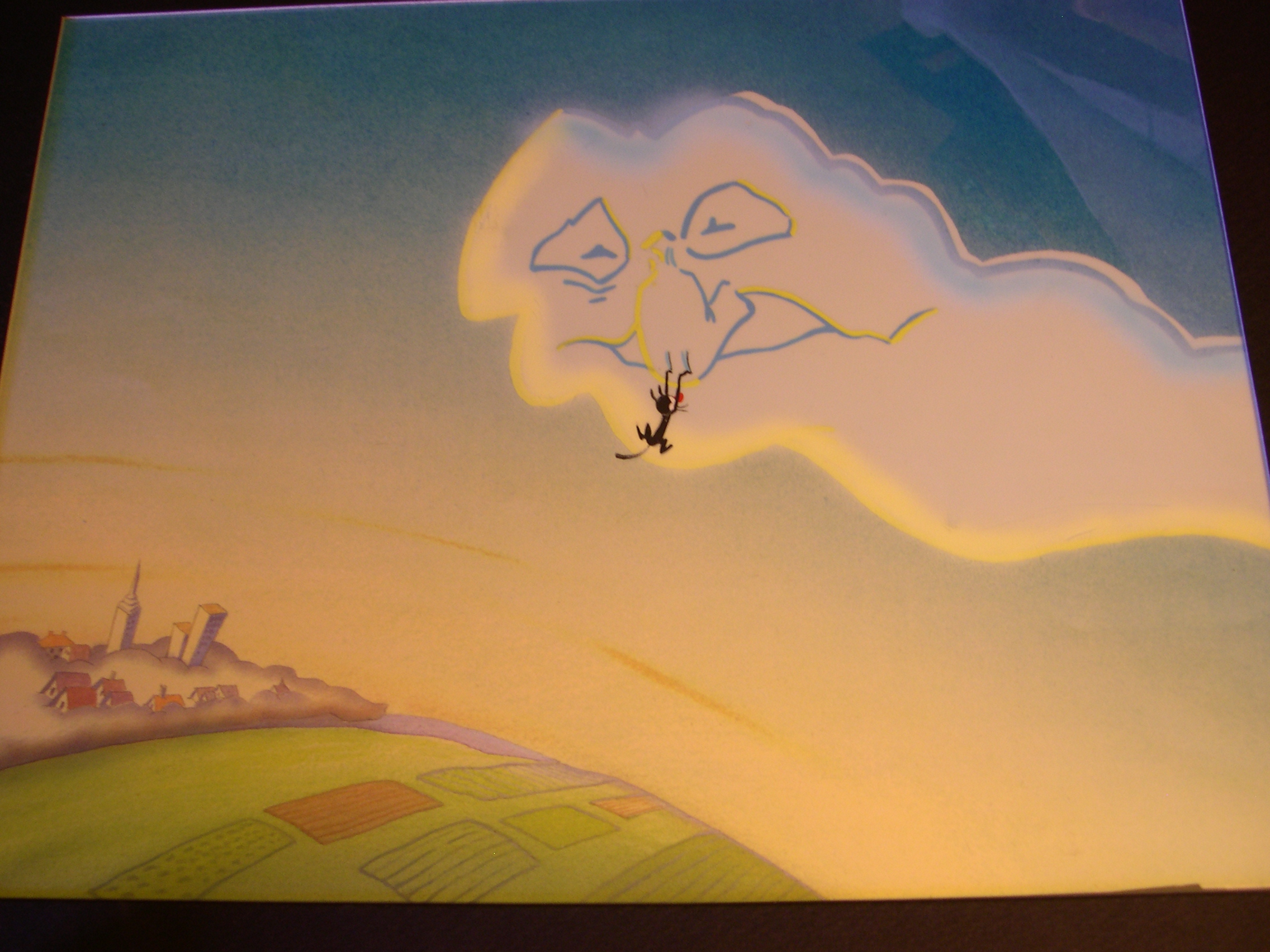 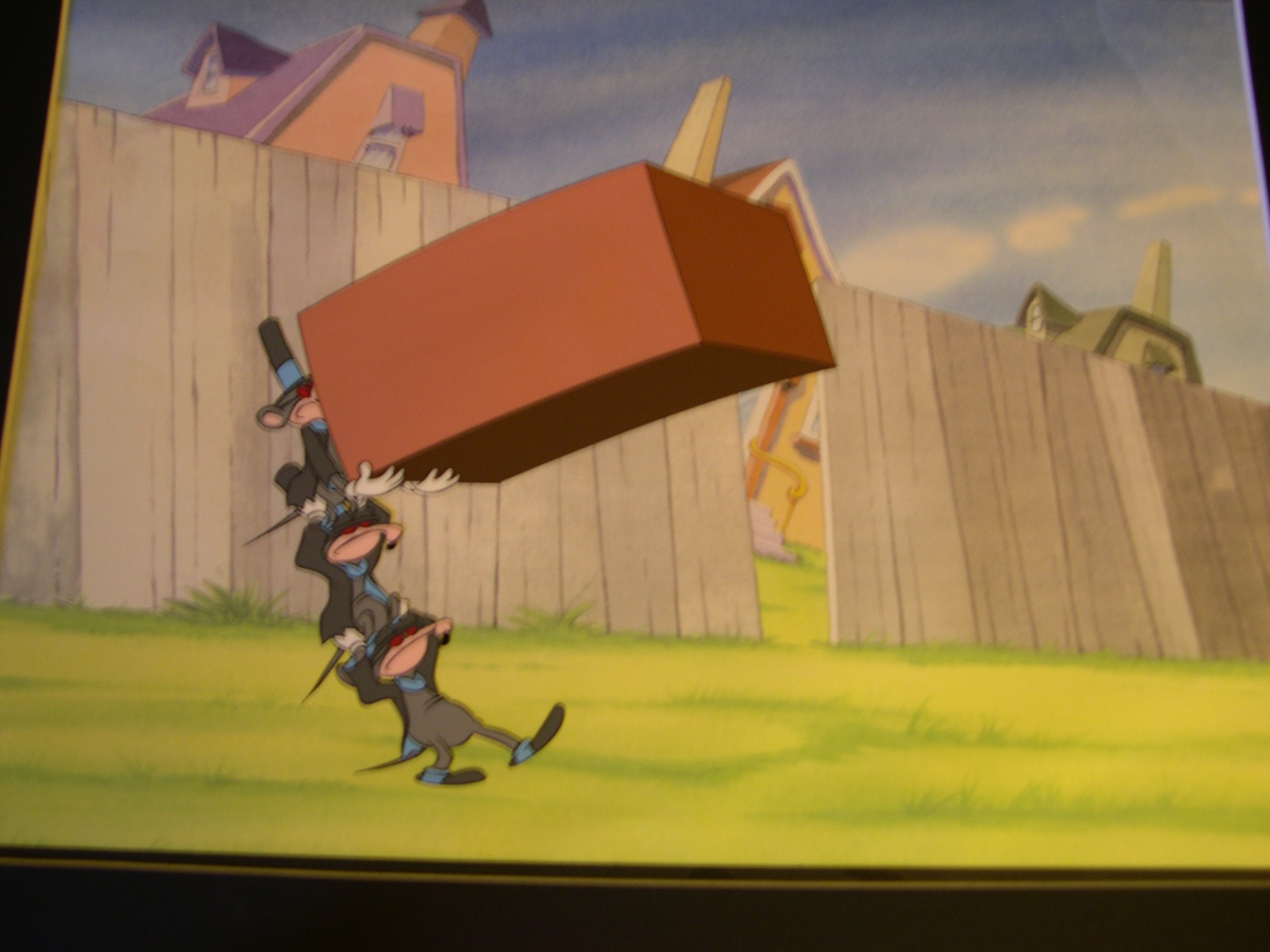 Howdy y’all! Here are two more cel set-ups for sale from “It’s ‘The Cat'” just in time for the holidays. They are both large 16 field cels with colorscan backgrounds, and each set-up is matted and includes the pencil drawings that went with them.  The Three Blind Mice wind up to throw a brick and the Cat falls through a cloud: only $100.00 apiece, if you buy more than one, they will be $75.00. Team up with your friends and save! By the way, if there are any special cels you want from the film, just let me know and we will make them available.

Cathy and I spent Friday and Saturday in Huntington Beach, didn’t see any of you blog readers there. Everyone that DID come had a great time. We spent much of Saturday making paintings of the Beachfront Cafe near the Art Center. At the opening on Saturday, Cathy and I struck up a conversation with a lady who wanted to start an art career after she retires from her current job. The exhibition opened with Cathy’s painting of the Cafe included. Well some time went by, and lo and behold it sold! The buyer turned out to be that nice lady we had the conversation with earlier in the evening. She liked us and Cathy’s painting. So, be friendly to folks you meet at a gallery opening, they may buy your art! On Friday night, the $25.00 a head opening went very well. Cathy did a painting of the old Brewster’s Ice House (since 1945) in Huntington Beach at the suggestion of a local we met the previous week when we were doing paintings of the pier. We did sketches and took some digital photos of Brewsters. Cathy put “Brewster’s Ice House” in the show with a painting she did of surfers called “View From The Pier”, and her study of the pier itself, called “Ruby’s on the Pier”. It was a great opening, our friend Michael Situ took first prize for a Harbor study he did which made Huntington Beach look like Amsterdam! Some time went by and a “red dot” meaning “sold” appeared on the “Brewster’s Ice House” painting that Cathy did. The buyer turned out to be (who else) the local(s) who suggested that Cathy paint the ice house. By the amount of folks giving the ice house painting the once-over, more than one Brewster’s painting could have sold!  So when participating in a “Plein Air Festival”, pay attention to the tips on subject matter that the locals give you, they may wind up being your customers!

The KKs from this week range from 12-5-1938 to 12-10. Garge is starting to repeat himself, this “spy” sequence appeared earlier. It is re-drawn here to good effect, I like the disguises in which KK, Ignatz and Offissa Pupp cloak themselves.  In 12-7, Krazy almost looks like he belongs to the “KK”-K! Also as in previous strips, the principal characters have many doubles. Lane Allen’s Diary this week has some good mood stuff and silhouette drawings, building up the suspense as Lane and Mack square off. Note the spooky tree in the last panel. More “It’s ‘The Cat'” cels on sale next week! Keep checking www.itsthecat.com for other cel set-ups.