Comments Off on Mangy’s Origin Story 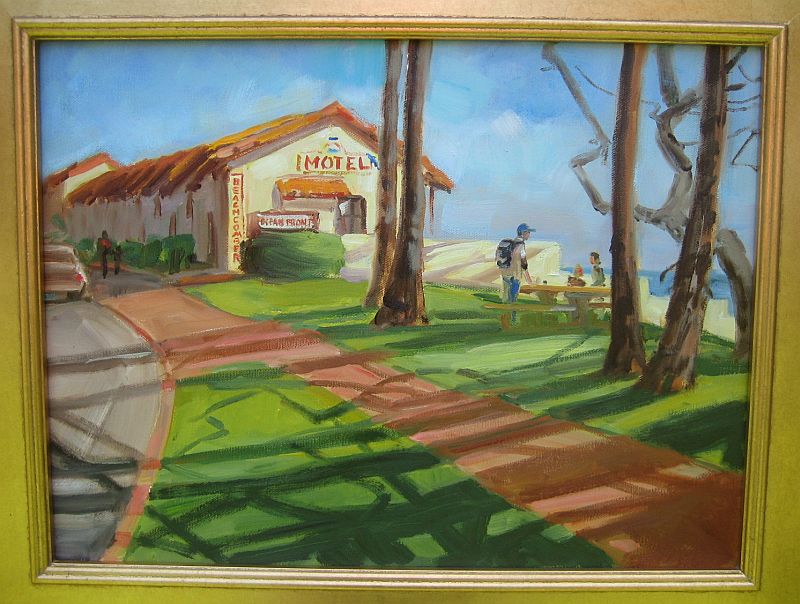 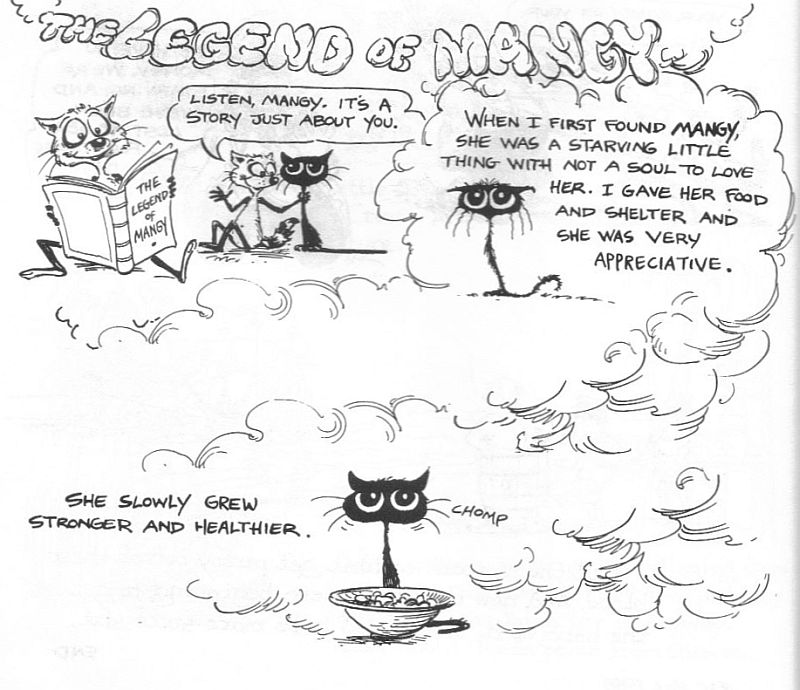 Hi Evvabody! Cathy and I are back from the San Clemente Plein Air Painting Event. It was very pleasant there, both for the weather and the many beautiful subjects for painting. We spent a couple of sessions at the Casa Romantica, which was the founder of San Clemente’s home in the 1920s. His name was Ole Hanson, a Swede who loved Spanish architecture. When he founded the town he created a city ordinance that restricted the style of building to Spanish. When he went broke in 1934, the city council changed that rule, but still the best and most beautiful buildings in town are all Spanish style. We actually got to paint INSIDE the Casa Romantica! Of course we had to put down tarps and make sure we stayed on them, but the view of the harbor and pier were nonpareil and the light in the spacious living room with its sunken tile fountain and arched doorways was gentle and lustrous. We enjoyed painting the reflections in the hardwood floor. On our last day, we came back and painted the front of the Casa from the parking lot. The entranceÂ has a unique “keyhole” shaped doorway, and a lush rose garden on either side of the front door. You must come and visit, Ole would want it that way. On July 4th, they are having a gala celebration with the best view of fireworks in San Clemente.

TheÂ prizewinners in the Plein Air Competition were all very competent, but we liked our friend Ray Harris’s “Casa Romantica Interior” as well or better than any of them. He did a charming study ofÂ a museumÂ lover examining some artifacts in the Casa’s anteroom. Ray made up the figure of a professorial type looking over some framed documents with indirect lighting. He got an honorable mention for his painting. Many fine painters were there, including Jason and Micheal Situ, Greg La Rock, Albert Tse and many others. It was a good way to escape the “triple digit” temperatures of the L.A. basin for awhile. Motels have gentrified quite a bit in San Clemente, it used to be 40 to 60 dollars for a room just a few years ago, now it’s 70 on the weekdays and close to 100 dollars on the weekends. A lot of artists just camp in their vans in the public parking lots all week, a practical approach to the high cost of motels. I’ve posted one of Cathy’s beautiful oils of the old Beachcomber Motel, a series of Spanish style bungalows overlooking the Pacific, with the Amtrak and Metrolink trains running between the motel and the sea. It’s a dream of ours to stay there some day, but at $200.00 plus a night, only a dream.

The comics this week are “The Legend of Mangy” from Cathy’s MAD RACCOONS comic book. She thought the readers might like to see how the character got started. This is not strictly new work, but it deserves reprinting. The story closely parallels the real Mangy’s life story, when we found her wandering through Cathy’s front yard in Sierra Madre and won her over with food. General Bullmoose tries cryogenics as a tactic in snagging Pappy Yokum’s copy of “Corporal Crock” #1 in this week’s strips from 4-23 to 4-28-1973. I wonder if Al Capp was thinking of all the rumors about how Walt Disney was supposed to have frozen himself, when he wrote this story? In MARVELOUS MIKE this week from 7-30 to 8-4-1956, Honeybear the cat eats like a horse and has some fillies, uh, kittens, much to Cliff Crump’s disgust. The charm of a bunch of cute kittens is lost on him. Also in the cat department, this is the Catblog after all, we have the next two pages of “There Auto Be A Law” from Felix #4. Tyer has a ball with the cop on page two, I love the cop’s enraged tantrum poses and his total collapse against the wall when Kitty double parks. I love being able to reprint these old comics, I hope you all enjoy them.

I got some response to the original Mangy comic I published a few weeks ago, this first is from my friend Milt Gray, who proposed I publish some new comics in the first place:

Congratulations to Cathy for her whimsical and stylish and observational comic strip, Mangy. I didn’t realize that you had already posted it, as I am often so focused on drawing my own cartoons that I sometimes procrastinate in surfing the Internet. I’m sorry that you haven’t gotten any comments yet, although people usually write only when they want to disagree about something. For the record, I wouldn’t describe myself as someone who is tired of the old classic comic strips — I love those strips, and I’m glad that you are making some of them accessible again. But I admit that I do advocate to my cartoonist friends that they should post their own work more, especially work that has never been publicly seen before. Hopefully that will attract an audience and we can begin to make at least modest livings (or better) from what we love. We should be promoting new talent — ourselves — atÂ least as much as other people’s work from the past.

Here are some words from Bill Warren on Cathy’s comic and other things:

Cathy drew a cartoon for me of our black cat Isadora (who tends to look a lot like Cathy’s drawings of Mangy) sort of haunted by images from 1950s science fiction movies.Â  That led me to ask Cathy to do the covers for the initial two volumes of my huge survey of those movies, KEEP WATCHING THE SKIES.Â  This was published in 1982 (vol 1) and 1984 (vol II), and were the first books from that company to have cover illustrations.Â  I insisted on it, however, and included a frontispiece in one volume similar to the covers.Â  Vol I covered 1950-1955; the front showed a little boy from behind watching a movie screen (or maybe the clouds of his imagination) illustrated with iconic images from that part of the 50s SF movies.Â  Vol II covered 1950-1962 (they didn’t stop making 1950s-type SF movies when the calendar changed), so the boy (now taller) is seen watching images from that chronological period.Â  Only time I’ve seen an illustration including a high of the Id Monster from FORBIDDEN PLANET and a goofy low of The Brain from Planet Arous.Â  The first volume also had a similar frontispiece by Cathy, only the boy is seen from the front–and it’s me.

Â Â Â Â  I am just finishing a rewrite of the entire thing; it’s now about a quarter of a million words in length.Â  And that’s before I do the index.Â  Someone else is doing the covers–the publisher wants color this time–but I’ll be including all of Cathy’s illustrations as interiors.Â  Along with some great semi-caricatures by Frank Dietz and a whole lot of photos.

Â Â Â  That Mangy and the Worm story reminded me of all this–no, this wasn’t just a blatant plug for myself–and that not long ago, someone discovered a black-and-white octopus in the waters just north of Australia that actually is an animal mimic.Â  There were photos of it looking like an upright fish, like a flatfish (a skate or flounder or something) and other sea critters too.Â  The world is full of wonders yet to be discovered.

Here’s another comment by Bill about Al Capp’s comics:

I still find 1950s Al Capp to be very funny, but the comic strip from that period that can still make me laugh about as much as I did when I first saw it is POGO.

Â Â Â  Of course, looking at it another way, PRISCILLA’S POP can still make me laugh about as much as it did originally–which was not at all.

Uh, oh! Now Al Vermeer’s fans are going to scream! Priscilla originally ran in newspapers from 1947 to 1983 outlasting Vermeer by a few months. The crictic Maurice Horn called “Prisilla’s Pop”, “impossibly sophomoric” and “trite”. Maybe I should reprint some of it!

My friend Larry Loc also wrote in: I did comment on Cathy’s page, (which I loved – more please) I just didn`tÂ do so to you. I made my comment in the form of a blog posting telling people they really need to get over to you page and check out the cool stuff. I am very excited about your new animation. When can I see the pencil test work print? Here are my comments: http://www.agni-animation.com/blog/2008/06/mark-and-cathy-show.html Thanks Larry, to date, still no complete pencil test. I think we have one scene (#22) that is still unaccounted for. Maybe in a couple of weeks?

Remember, comments can be sent to molasses@earthlink.net.