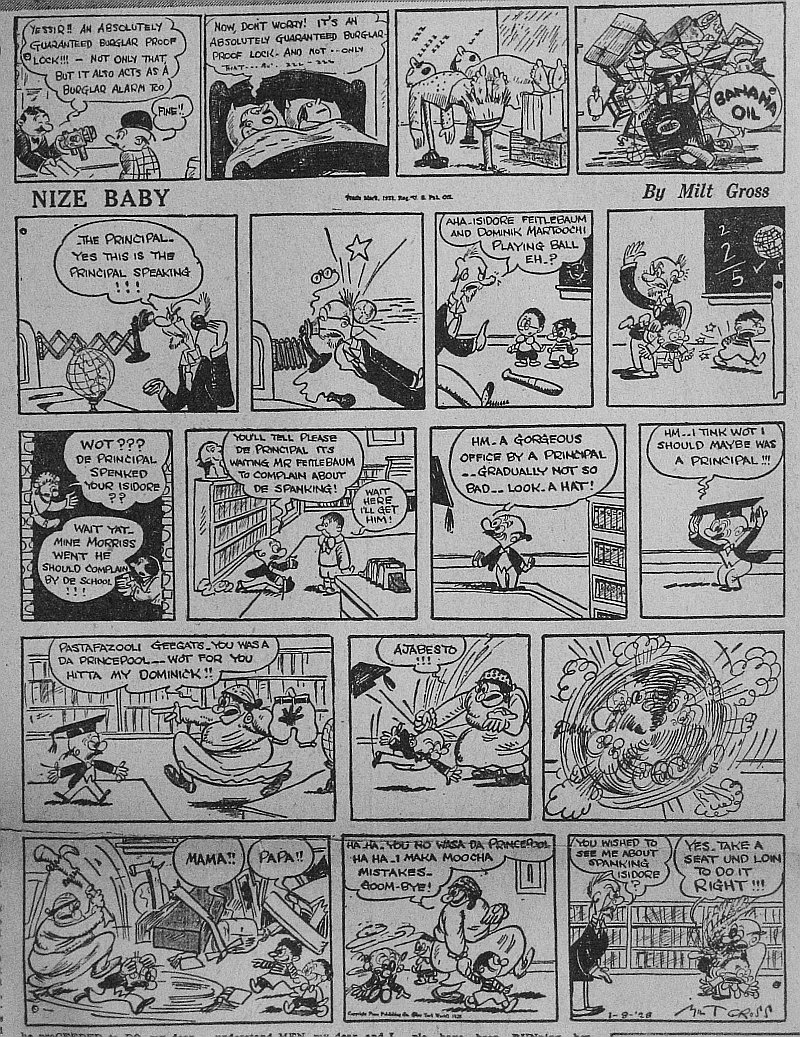 Hello all you fans of old cartoons. First up this week, NIZE BABY from 1/9/1928 by Milt Gross. Battling stereotypes this week, Jewish Vs. Italian. The Italian mother mistakes Papa for the school Principal and beats him full sore. Then, it’s Isidore’s turn to get corporal-ed again by Papa, right in front of the Principal who whacked Izzy in the fourth panel! Milt’s drawings of the Italian Mama beating Papa (“Ajabesto!”) are cherce, I like the double wide panel with Goomba Mama chasing Papa as Isidore and Dominick casually walk in to the scene.

Krazy Kat from 11/27/1939 to 12/2, has no theme this week, no Kontinuity. Just  “Warped with Fancy, Woofed with Dreams”. I favor 12/2, with Mrs. Kwakk-Wakk and a Magpie friend having a gossip, while the three stalwarts walk behind them with ears akimbo.

Marvelous Mike from 7/8 ro 7/13/1957, introduces a new story line featuring Mr. Bell, a comic strip cartoonist suffering from a major writer’s block. In 36 hours at the board, he has only come up with four blank panels. Cliff Crump learns that Mr. Bell’s strip features a little girl named “Madeline”, and in the 7/13 is starting to hatch an idea. See next time for more episodes in one of the top stories in the Mike saga.

Felix the Cat, from 6/15 to 6/20/1936 (6/19 missing), continues Felix’s dalliance with the Dooits. Uncle Minus’s ten gallon hat provides a combination shelter and disguise for Felix, until a Swami puts a bulldog into the hat with him. One of the most charming aspects of the Felix strip is the little cat’s longing to be wanted and find a loving home. He never really finds the love he’s looking for, but you can’t help rooting for him and his quest. I think the jokes are really secondary to the character’s essential likability.

I had fun posting the video of the “water cat” last week. I got one good comment from Charlie and a whole lot of spam. Maybe linking to You Tube puts the site into Spam mailers’s talons. I don’t link to the Tube often, but couldn’t resist last week. If you want to see the show, go to last week and click the link before it becomes non-operational. Remember to “Tip” your favorite blogger by going over to www.itsthecat.com and buying a cel or two. Several folks have written to me wondering when my next short will be out. I really don’t know, but if you buy a cel, maybe the new film will be out a few weeks sooner than if you choose not to.