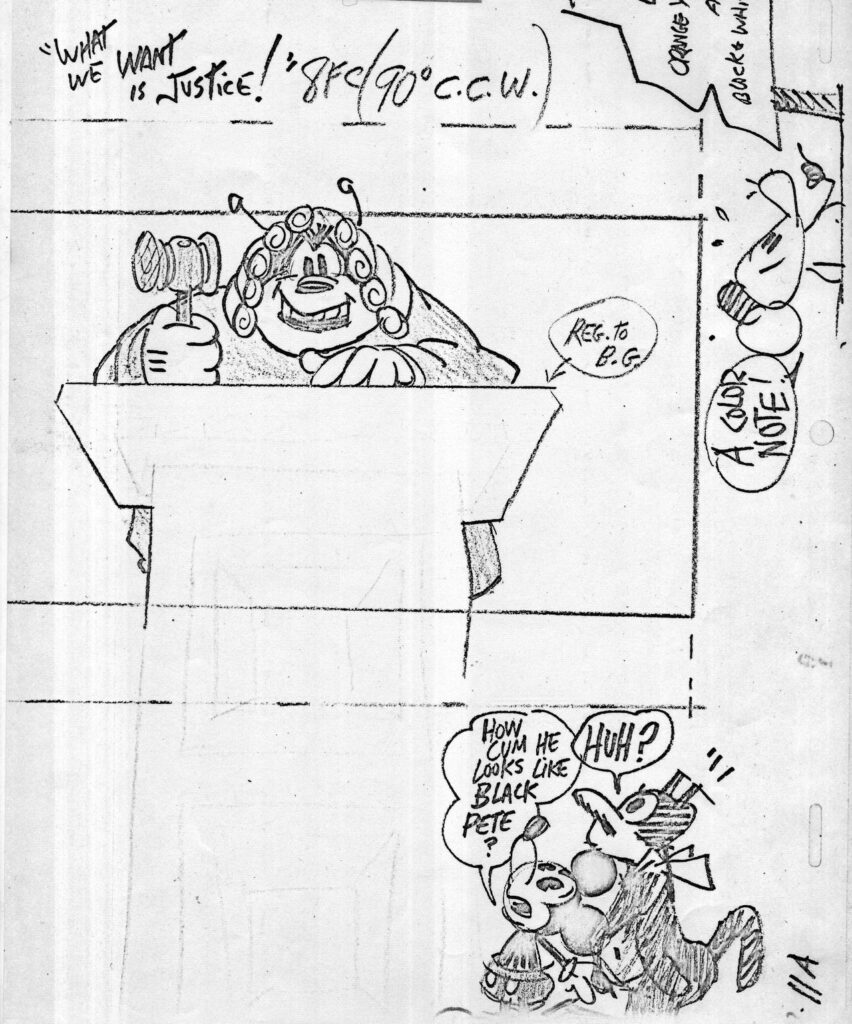 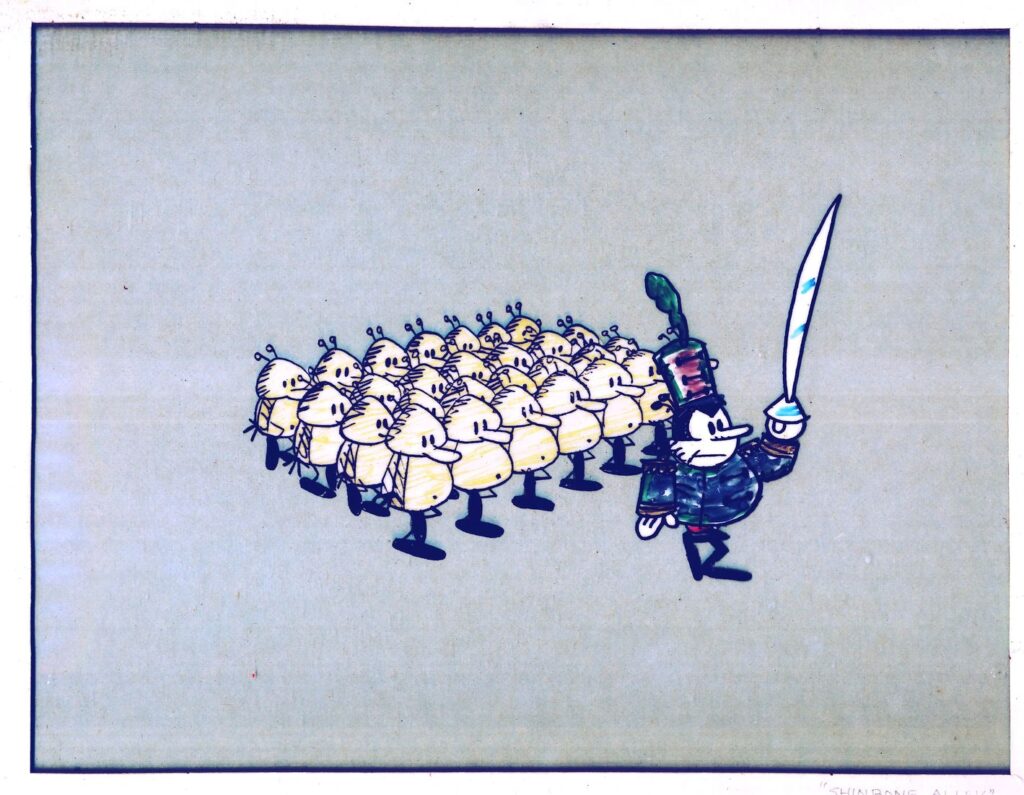 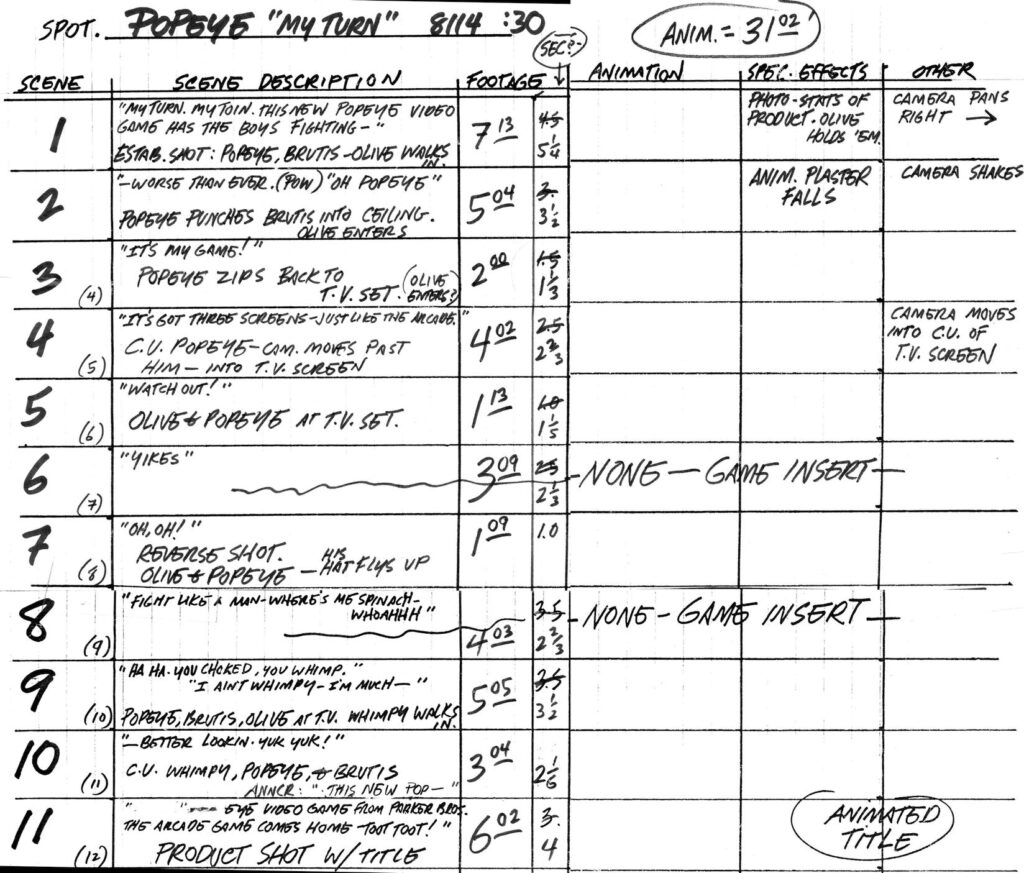 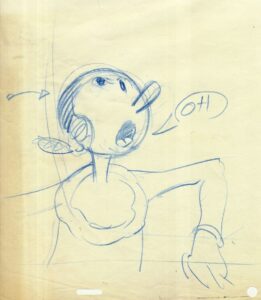 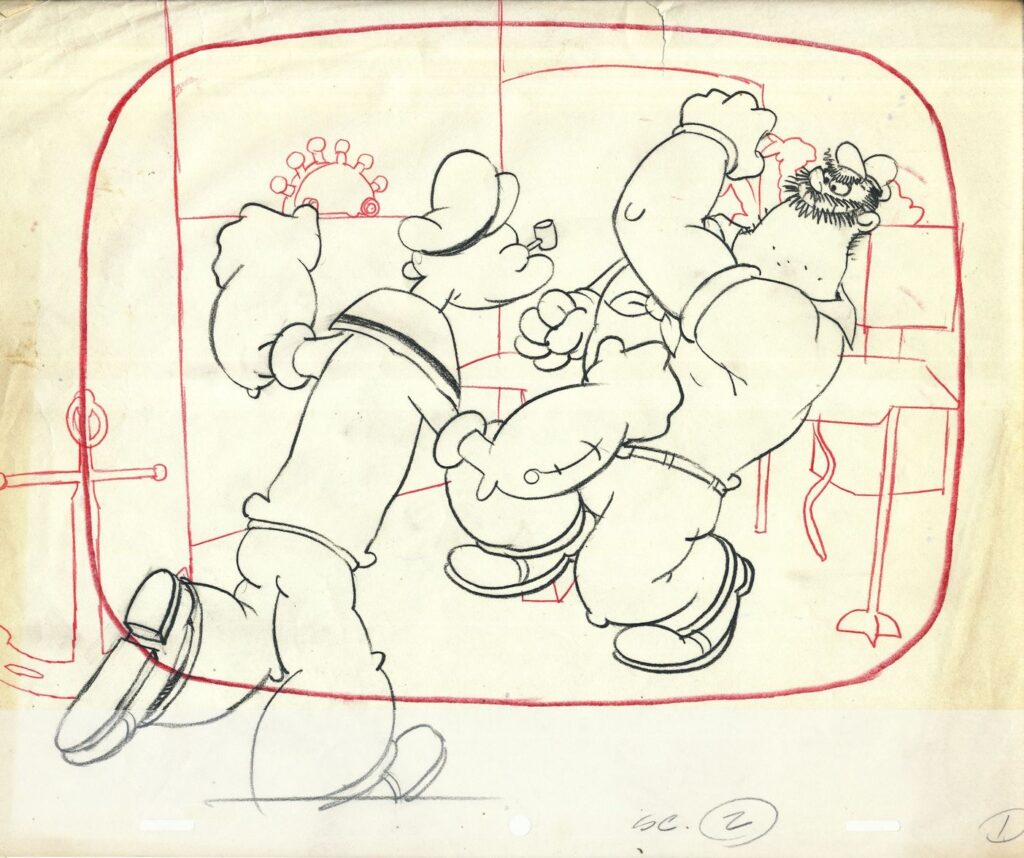 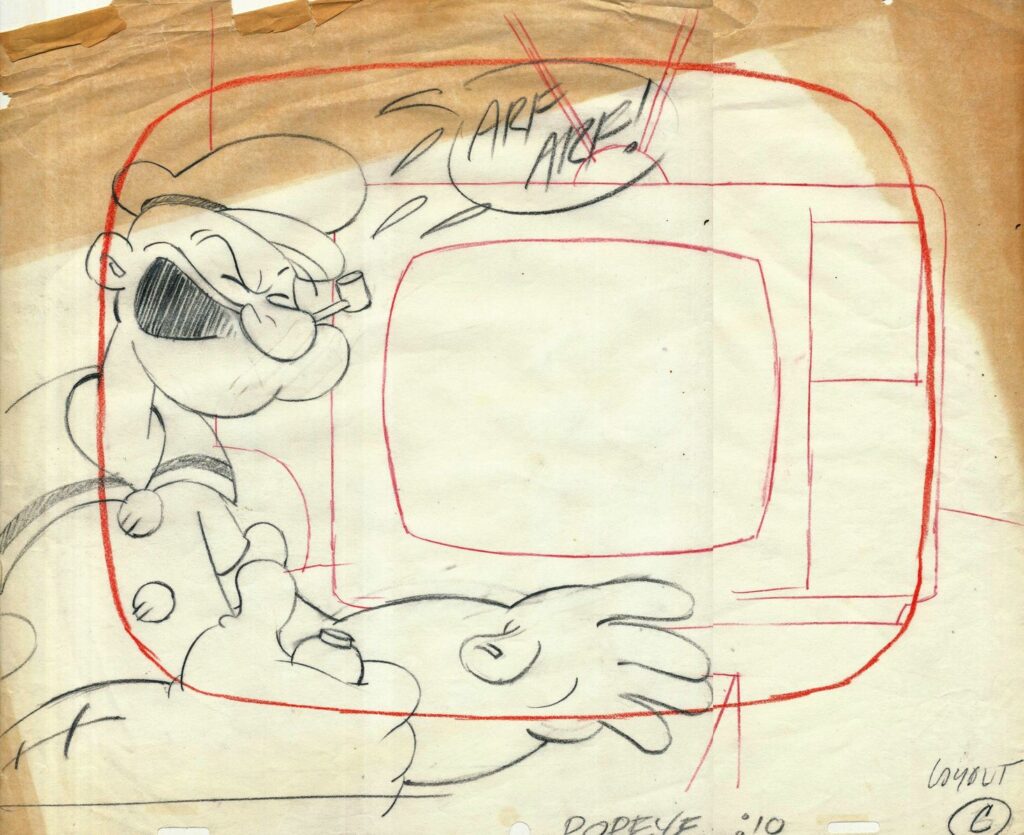 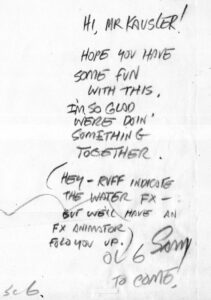 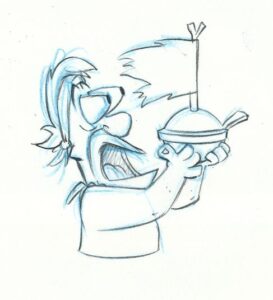 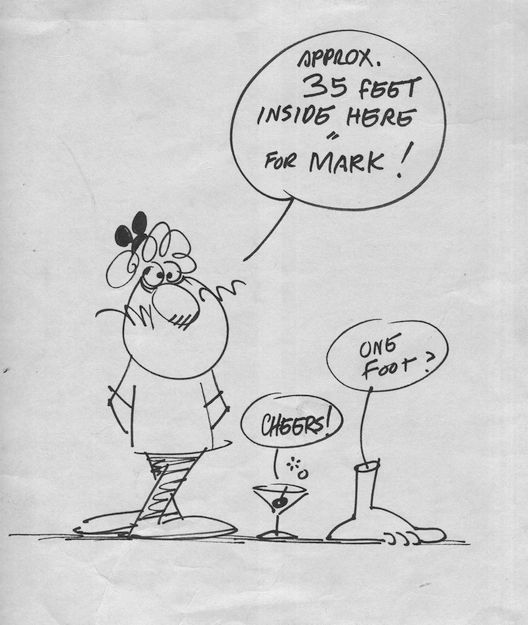 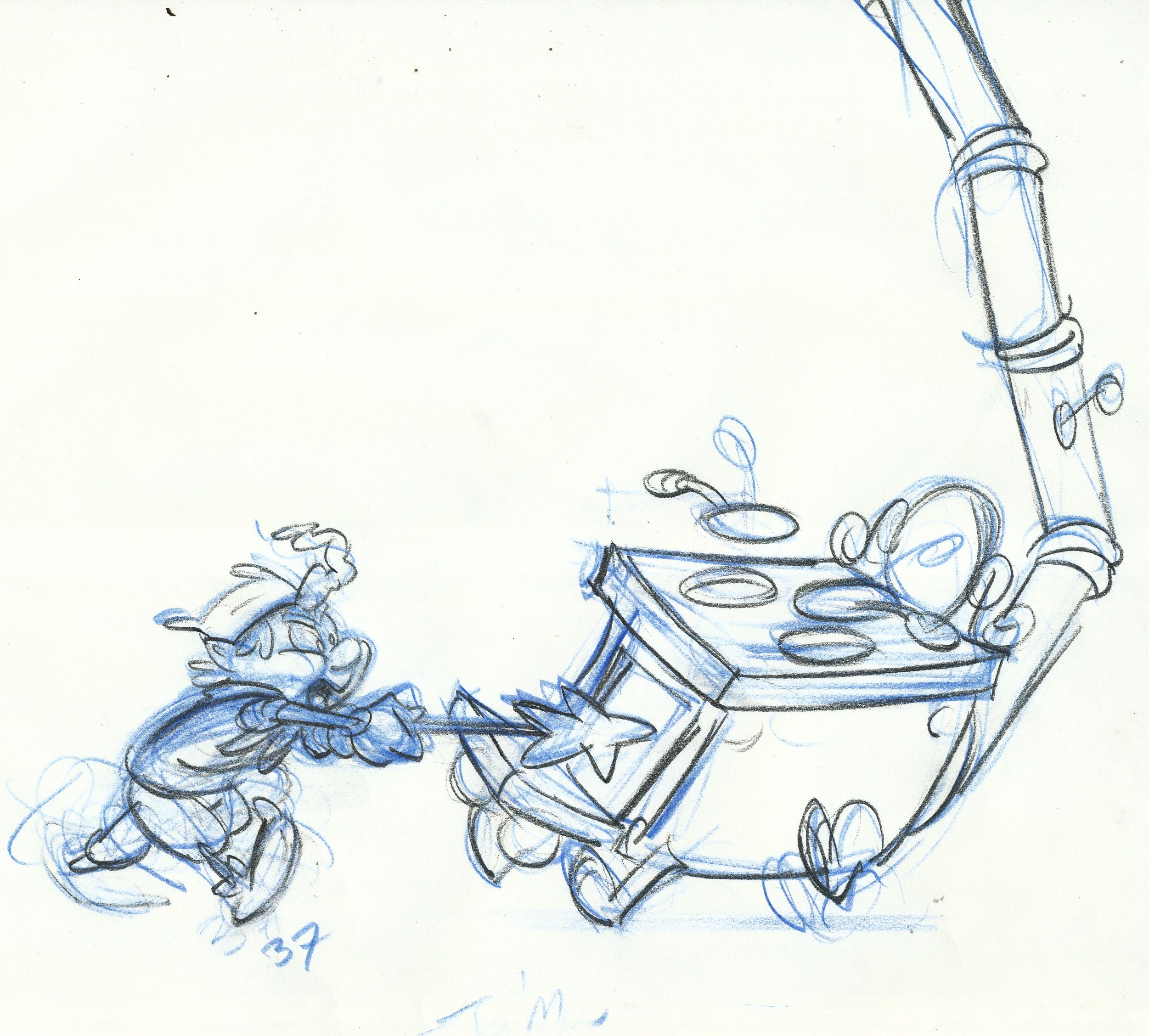 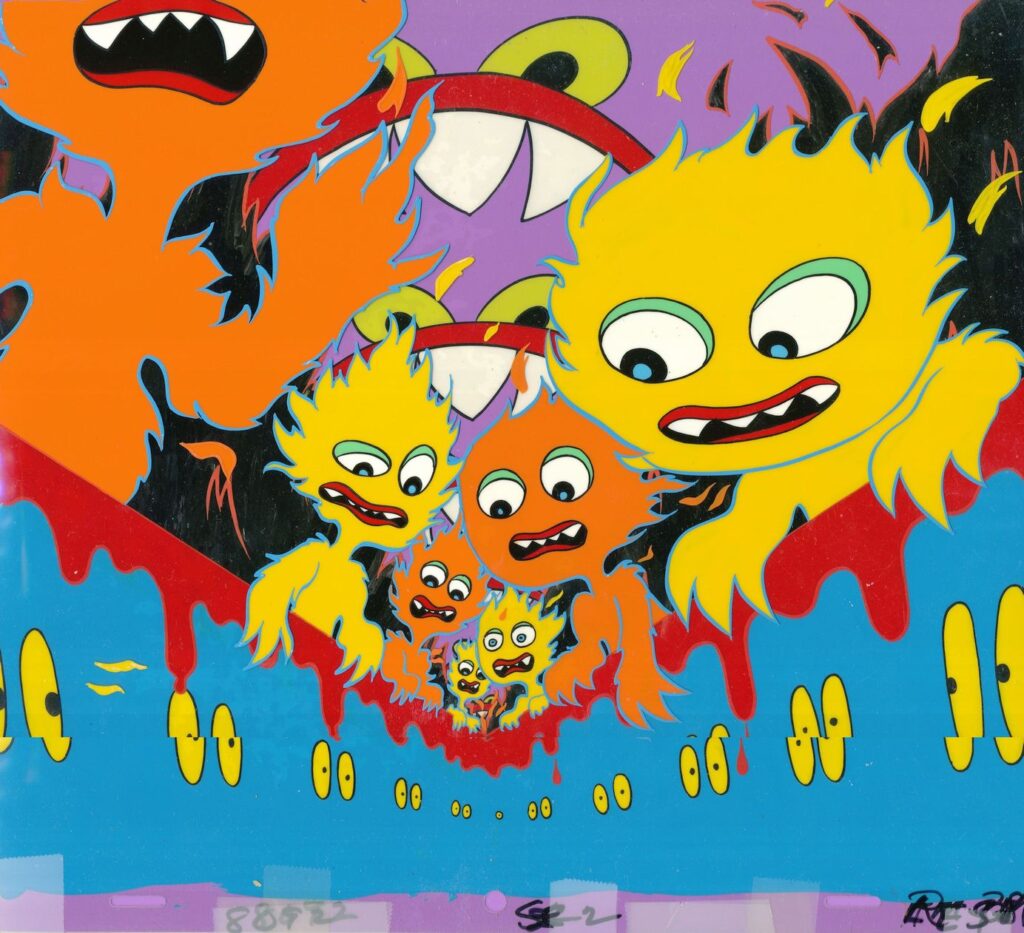 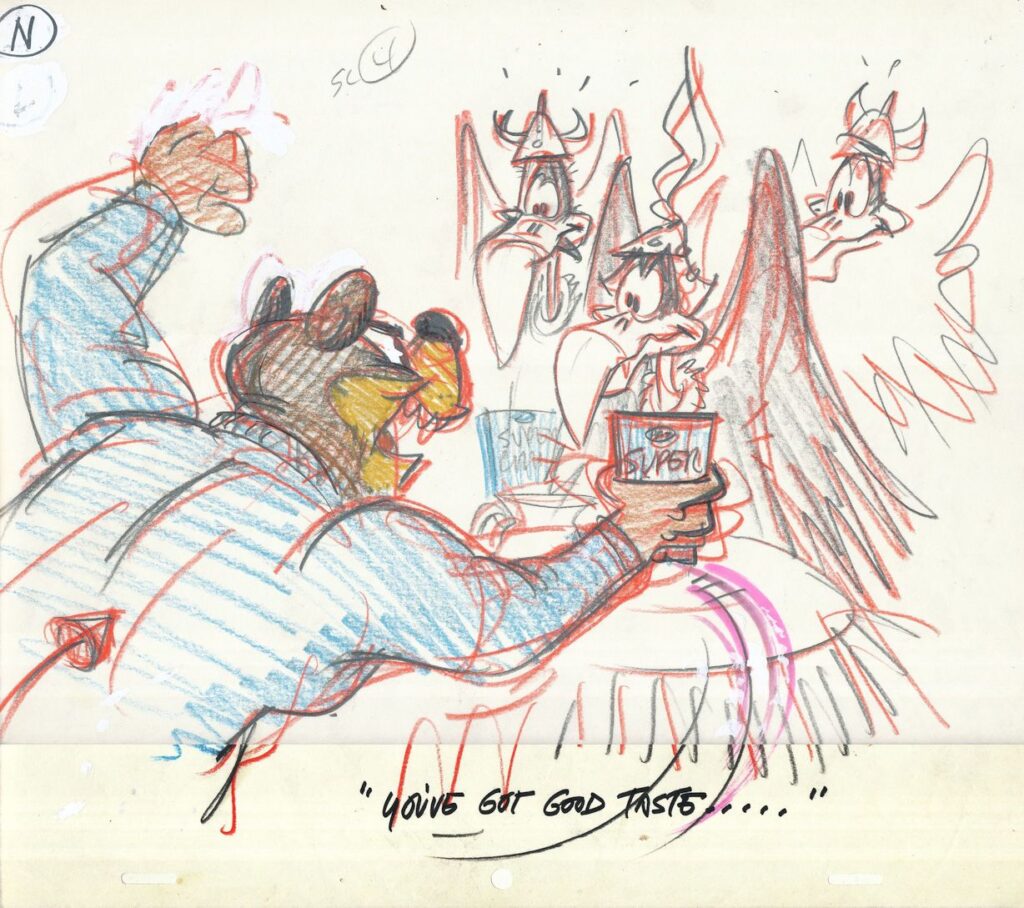 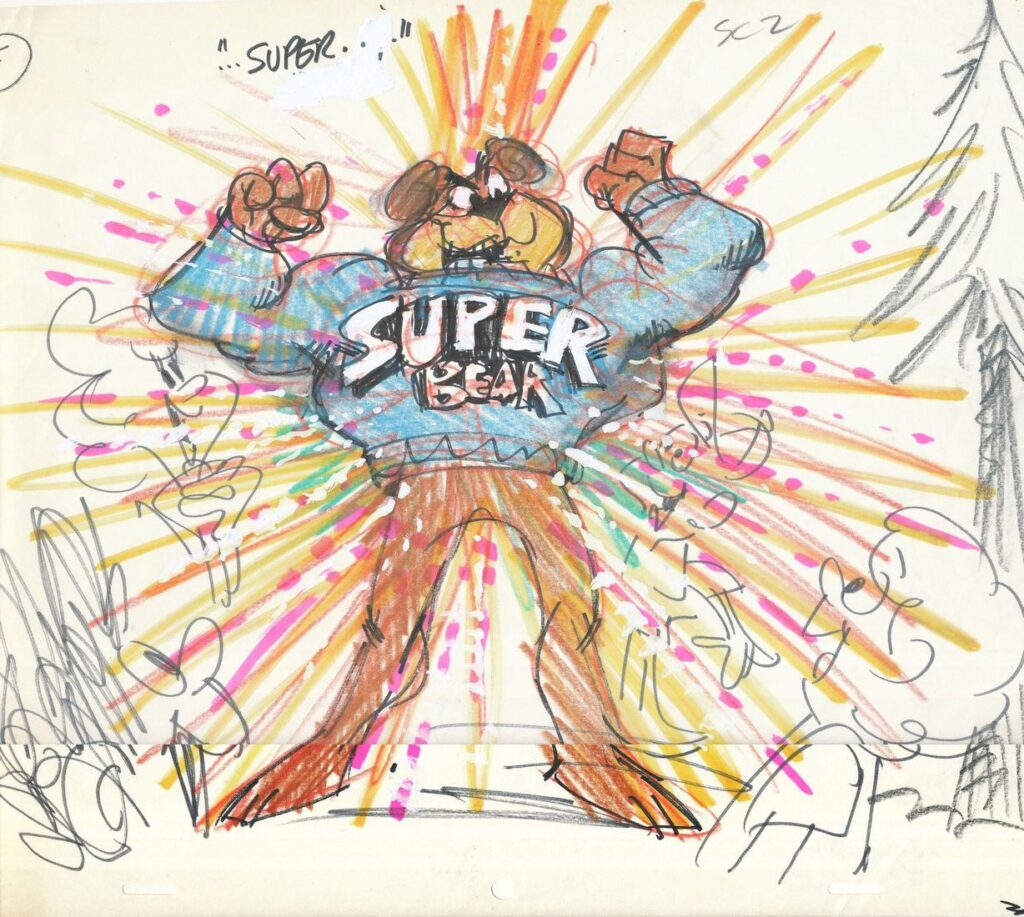 Here is my friend Sam Cornell’s obituary from the Pegboard, the Animation Guild’s newsletter:

Sam Cornell d. 5/01/2021 â€“ Industry veteran Sam Cornell is
known for his varied work on Twilight Zone: The Movie, The
Rugrats Movie, The Wuzzles, and Shinbone Alley. His many roles
included Storyboard Artist, Layout Artist, and Title Designer. He
also directed numerous commercials with classic characters such
as Tony the Tiger and the Keebler Elves.

I guess that’s a little start on a career summary, but it misses the real Sam. I think Sam would like to be remembered as an excellent cartoonist, a really fun and cordial kind of guy and a husband and father, which I assume that he was. Sam was a dark haired slightly beefy guy with a big dark mustache. He had dark eyes that sometimes sparkled merrily. Sadly it’s been so many years since I’ve seen any of his family that I can hardly remember them. I remember that one of Sam’s children was in the “Indian Guides”, sort of an alt-world Boy Scouts, and that Sam was a senior Guide. We love George Herriman around the old Catblog, and Sam was the first animated cartoonist I met in So. Cal. who also loved Garge and of course early Disney design. If you look to the top of the post, you will see one of Sam’s layouts from the “Archy Declares War” sequence in the feature cartoon, “Shinbone Alley”, directed by John Wilson. Sam loved to talk old cartoons and cartoon history and gave me a lot of ideas for study. He was one of the first adults I met who made it OK to really enjoy old cartoons and really appreciate what made the drawings good and appealing. Look at the control he had with Pentel felt pens, he could get a good approximation of steel point inking and could draw Krazy and Ignatz in his own way, while paying tribute to Herriman at the same time. Frank Andrina was the animator on the “Archy Declares War” sequence, and I wound up doing inbetweens for him. Frank knew how MUCH I wanted to animate a professional scene, and he gave me one of my first chances to do so. Just below Sam’s layout you will see a cel set-up from that first scene, a marching army of bugs led by General Roach himself. Sam designed these characters as well. Frank animated all the scenes in this part of “Shinbone Alley” in felt tip pen, and all us inbetweeners had to follow him up with pen drawings as well. These were then Xeroxed on to cels. In the old days, good inkers would have been relied on to get the Herriman “line”, but by 1969, animators and assistants were responsible for the final line quality that reached the screen.

Â Â  A few years later, Sam Cornell and fellow Chouinardian Gary Katona, formed a little company called Pacific Motion Pictures. I was hired on as a staff animator, I even had a business card! Randy Akers, who was a good friend of Gary’s was an art director for the little company. One of the most fun TV commercials we made was for Popeye Video Games. We styled the characters a bit like Segar, a bit like Bela Zaboly and a little bit like Fleischer. Randy actually constructed real sets for the spot, which were photographed on a sound stage. The idea was to emulate the Fleischer “Stereoptical Process” 3-D backgrounds without actually sculpting and building the miniature sets. In the finished commercial, you can hardly see the sets with their glass brick and translucent counter tops for the animated characters exposed over the live action “plates”. I remember that Randy was kind of upset that my ugly animation was blocking his beautiful sets. In the layout for Sc two (see above), you can see how much room I gave Popeye and Bluto/Brutus and just how much they covered Randy’s set, which I traced in red from the photostat.Â  I think Sam liked the look I gave Popeye, Olive and Bluto/Brutus. At the time it seemed so futuristic to have old Popeye playing the new thing called a “Video Game” of himself. Now it seems quaint as the Popeye video game looks very early 1980s. Sam also directed at FilmFair studio in the San Fernando Valley, run by former animator Gus Jekel. A lot of talented people worked there, including Bob Kurtz, who had his own little subdivision of FilmFair called “Festival Films”. Sam supervised the more traditional animated commercials, such as Charlie the StarKist tuna, and Ernie Keebler from the cookie family. A lot of old timers hung around FilmFair picking up work, I met Rudy Zamora Sr., who dated back to the silent Felix the Cat cartoons and the Fleischer cartoons in New York. Rudy didn’t look his age at all, he still had very black hair and a lot of energy. One of Sam’s favorite animators was Stan Walsh, who was one of the original partners in Quartet Films, along with Mike Lah and Art Babbitt. Stan was a rock solid traditional animator who did beautiful stuff on Charlie Tuna. In the 1970s and 80s, traditional animators were called “Mouldy Fig” and “Centerline Animators”. If you didn’t draw like Heinz Edelman (the top designer on “Yellow Submarine”) you were relegated to the sidelines. People like Stan Walsh were just taken for granted, along with people like Hicks Lokey and Amby Paliwoda. These guys could really draw volumetrically and could turn and twist a character in any direction, which came in handy for characters like Tony Tiger, Ernie Keebler and Charlie Tuna. Sam admired cartoonists who drew “funny” and well. Here’s a link to the ONLY radio interview ever done with Sam: HERE. In this interview, Sam talks about his involvement with the Seattle World’s Fair in 1962 and the creation of the Unisphere with Harper Goff, a Disney Imagineer. Harper said that Sam drew with a “Funny Pencil”, and that really sums up Sam’s approach to drawing. He just couldn’t help being a clown with cartooning. We worked on quite a few things, notably an animated sequence for the “It’s A Good Life” seqiemce of theTwilight Zone movie, designed by Sally Cruikshank. Ethel, played by Nancy CartwrightÂ  (who eventually became the voice of Bart Simpson and a multi-millionaire) is wished in to Cartoonland by Anthony, played by Jeremy Licht, where Ethel is eaten up by a Sally Cruikshank monster. The main flaw in the sequence is that Ethel’s demise is not gory enough. We had fun making our part of the sequence, but had a hard time balancing the flatness of Sally’s designs with the dimensional look required to work with a live actor (Nancy). I also animated part of the title sequence for the “New Woody Woodpecker Show”, in which Woody was being chased by Wally Walrus. At first Sam thought the animation was too “fast”, but changed his mind when all the inbetweens were done and the cels were painted. I really enjoyed animating one of my favorite characters, Woody. I applied several times for work at the Lantz studio in the early 1970s, only to be told that “You’re gonna have to wait until some of these guys DIE before we’d ever hire YOU!” Sam gave me the chance to at last do one scene with the red headed rascal.

Sam did take a drink or two occasionally, and I think he may have been a smoker, judging by the slightly wheezy tone of his voice. The girls liked Sam a lot, he had a knack of making them laugh and complimenting them at the same time. Sam unfortunately was in a terrible car accident, in which he ran his convertible off the highway and right under a roadside billboard, as I recall. He broke nearly every bone in his body, and I visited him in the hospital. I think he tried to laugh a little, but it was too painful for him. He walked with a cane for the rest of his life, but bounced back almost as jovial and convivial as he was before the accident.

The last time I heard from him was just about three years ago. Sam was in a care facility in Ojai where his family had placed him and he called me on the phone one Sunday afternoon. He was very cordial and complimentary to me about my animation for him over the years. He wouldn’t say just what ailment was keeping him in the facility, but he did say he liked the place. I really enjoyed hearing from him. About a year later, my wife and I were in Ojai for a film festival and tried to find the care facility where Sam had called me from, but he had been moved somewhere else by then. I don’t know what was the actual cause of Sam’s demise, perhaps it was complications from his car accident injuries. It’s not pleasant to dwell on what he died from, it’s a lot more fun to remember Sam the Funny Cartoonist!

You can see from some of the images I’ve collected here, that Sam tried to make every assignment from him as much fun as he could. The little drawings and notes really made me want to get in to animating the scenes. I especially like the self-portrait that Sam put on an envelope that contained “Approx. 35 Feet inside here for Mark!” Note the cocktail glass and the severed foot alongside Sam’s portrait. Sam drew himself with Mickey ears because he liked the Mouse and did direction and layout for several commercials featuring Mickey and the Disney characters. If you listen to the radio interview, Sam outlines some of these commercials combining live action and animation. That envelope held the layouts to the last animation I did for Sam, a Keebler commercial with a runaway “Magic Oven” pursued by a Keebler elf, as you can see on one of the ruffs I did for the spot.

To give you an idea of Sam’s “funny Pentel”, I’ve included a couple of his drawings from a Super Sugar Crisp commercial he directed with Sugar Bear and a couple of vultures in the cast. I love the lively effects he achieved with marker and white out to make Sugar Bear look “Super”, and the wild action implied as Sugar Bear faces the vultures. I also like the little cheek he drew on the Bear’s face, a real MGM cartoon/Harvey Eisenberg touch.Sam’s drawings were inspiring to work with, even though I had to re-interpret the characters to put them on model. I always kept Sam’s drawings pinned up on the desk to boost my enthusiasm. They bristled with energy!

It’s not easy to say goodbye to such a great friend and employer who valued my work. Sam’s “funny pencil” turned out hundreds of amusing sketches over the years. He even sent out funny Christmas cards, one of which featured a turbaned character in a Moroccan desert pushing a cart that was labelled: “Cheeses of Nazareth”. Sam was so well thought of at Jay Ward’s studio that there was an old animation table in the basement with a placard reading: “The Sam Cornell Memorial Desk”.Â  Maybe that desk is still there, along with the memories and funny drawings that Sam left in it.Â  I learned from the Union newspaper, “The Pegboard”, that Sam had passed away. I’m sure you can imagine dear reader, just what a sad discovery that was. So Long Sam!

Here’s a short list of work that Sam kept on his resume: