Â Here’s Felix, 10-1 to 10-7-1934. The homeless puss manages to get into a vacant hotel room, order room service and escape from the hotel dicks unscathed! In the Sunday, Messmer uses a tried and true Felix formula, he is chased by angry sailors who are convinced he is a jinx, then he manages to plug a leak in the ship with the body of an escaping mouse (Skidoo?). Felix is once again “in good” with the sailors.

Â Myrtle is from 7-5 to 7-11-1948 and Dudley Fisher’s special timing is most in evidence in the 7-5 as Freddie is in the “doghouse” with Susie after scolding Bingo and making him cry. I like the wordless final panel. I also like Freddie’s struggle with nicotine addiction in the 7-7 after he throws his cigarette out the window and lives to regret it, and the Sunday page is fun with the boys away at a business convention and the wives and girlfriends at home playing cards, which so many people did as a past-time in the early twentieth century. 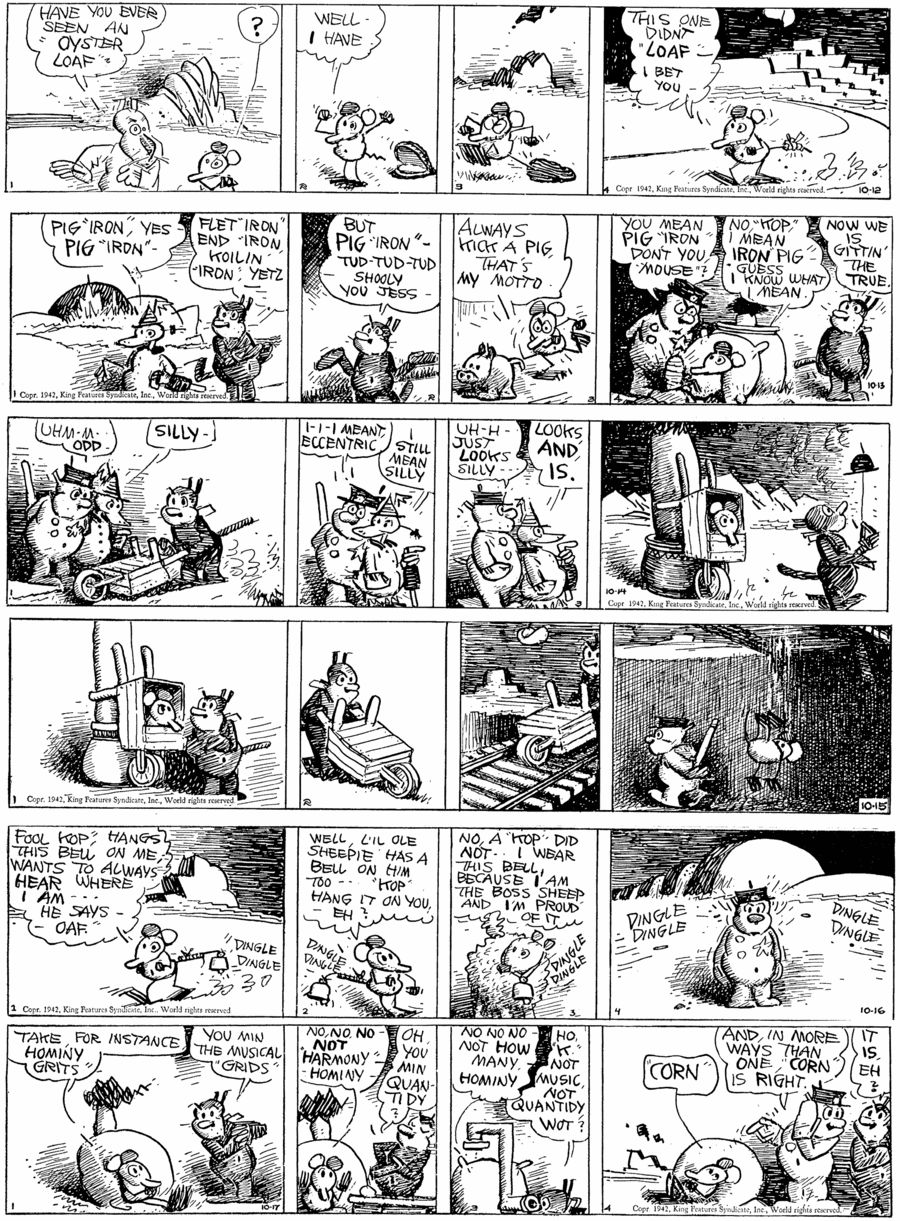 Â Krazy was originally published from 10-12 to 10-17-1942 and the strips seem a bit trimmed around the edges, don’t they? I love the 10-17 as Krazy and Ignatz trip over puns and Kat Langwidge. “Harmony”, “Hominy” and “Quantidy”, as Krazy interprets Hominy as “How Many?” Garge comments on his own work as Ignatz says “Corn” and Offissa Pupp says “..and in more ways than one, Corn is right.” 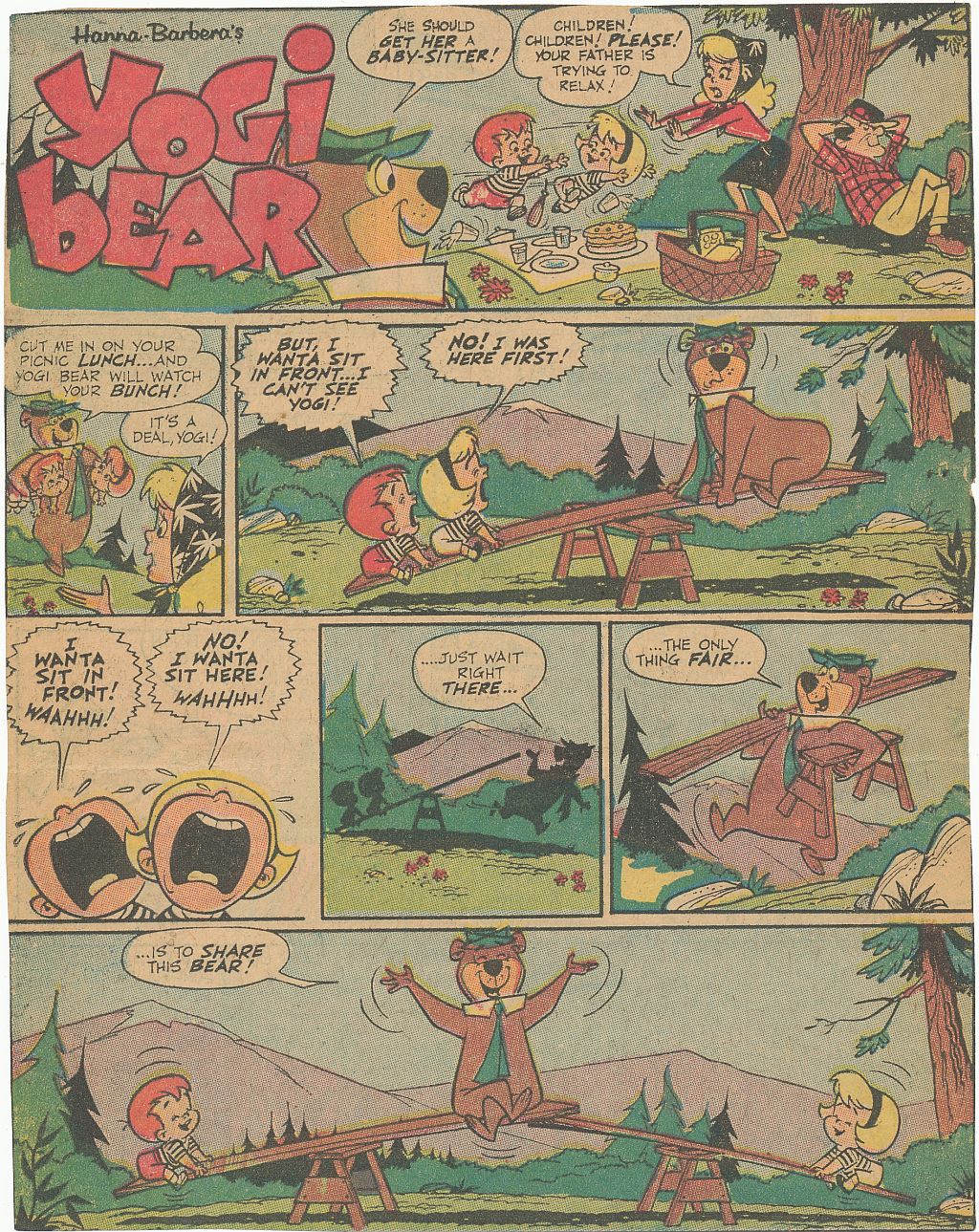 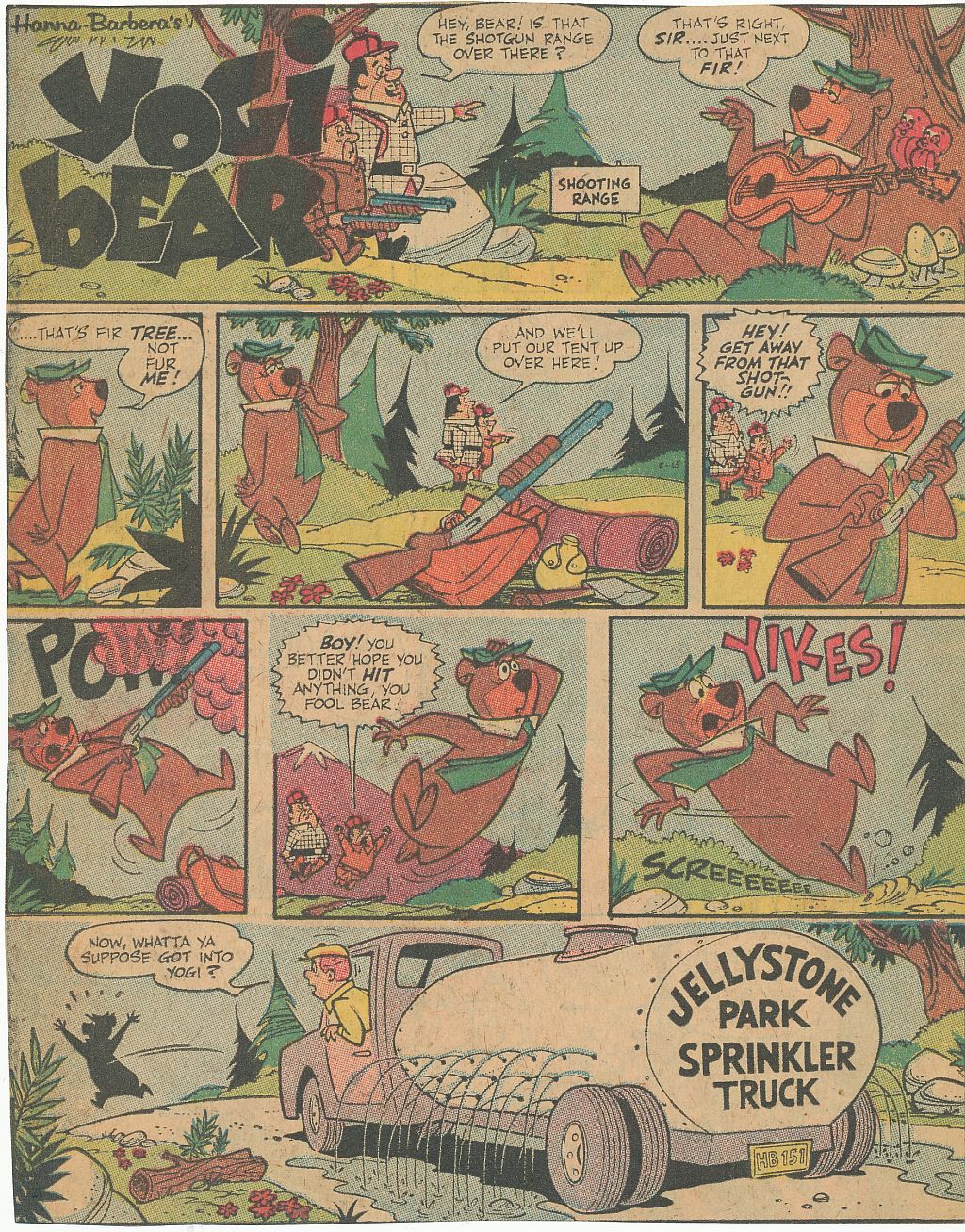 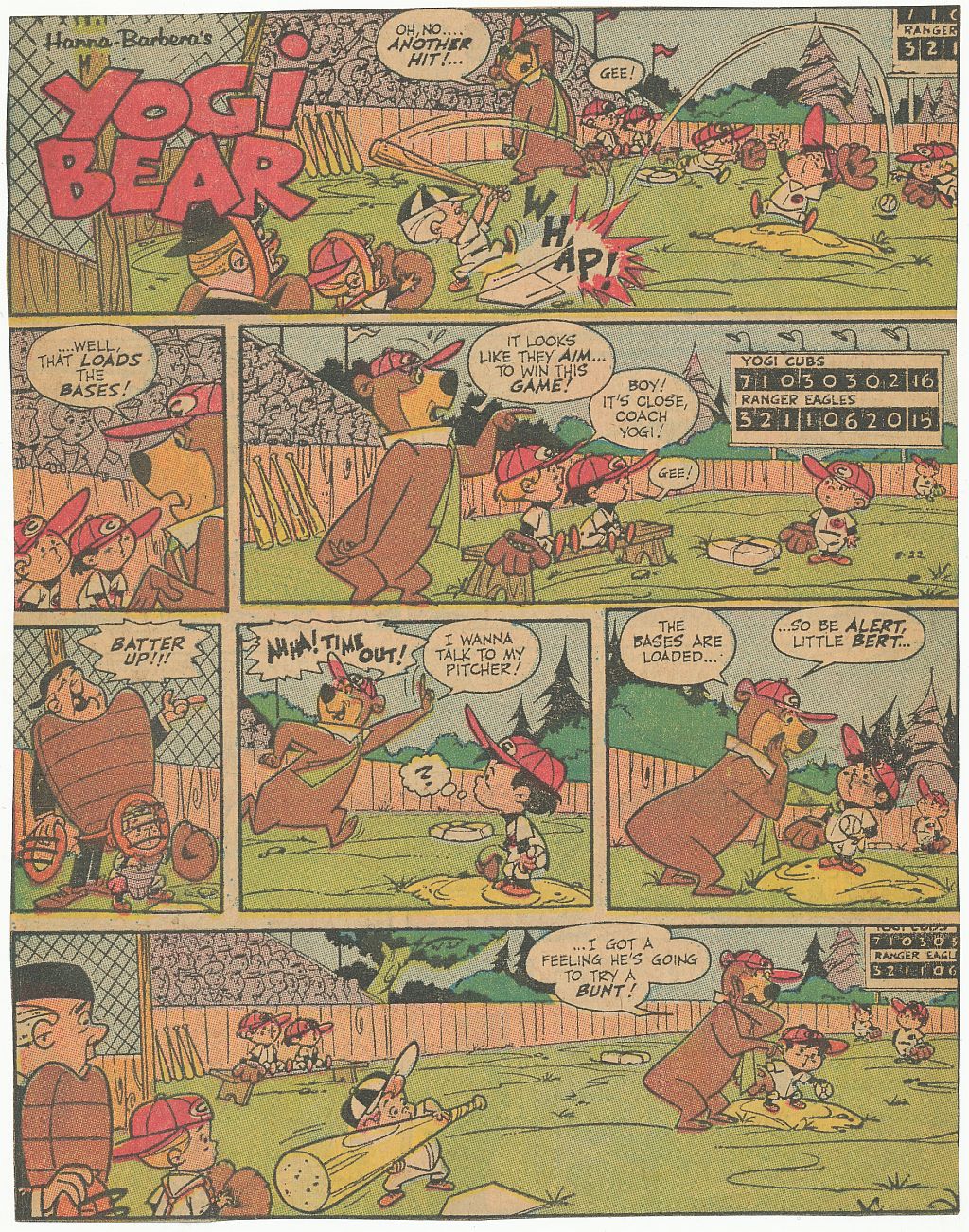 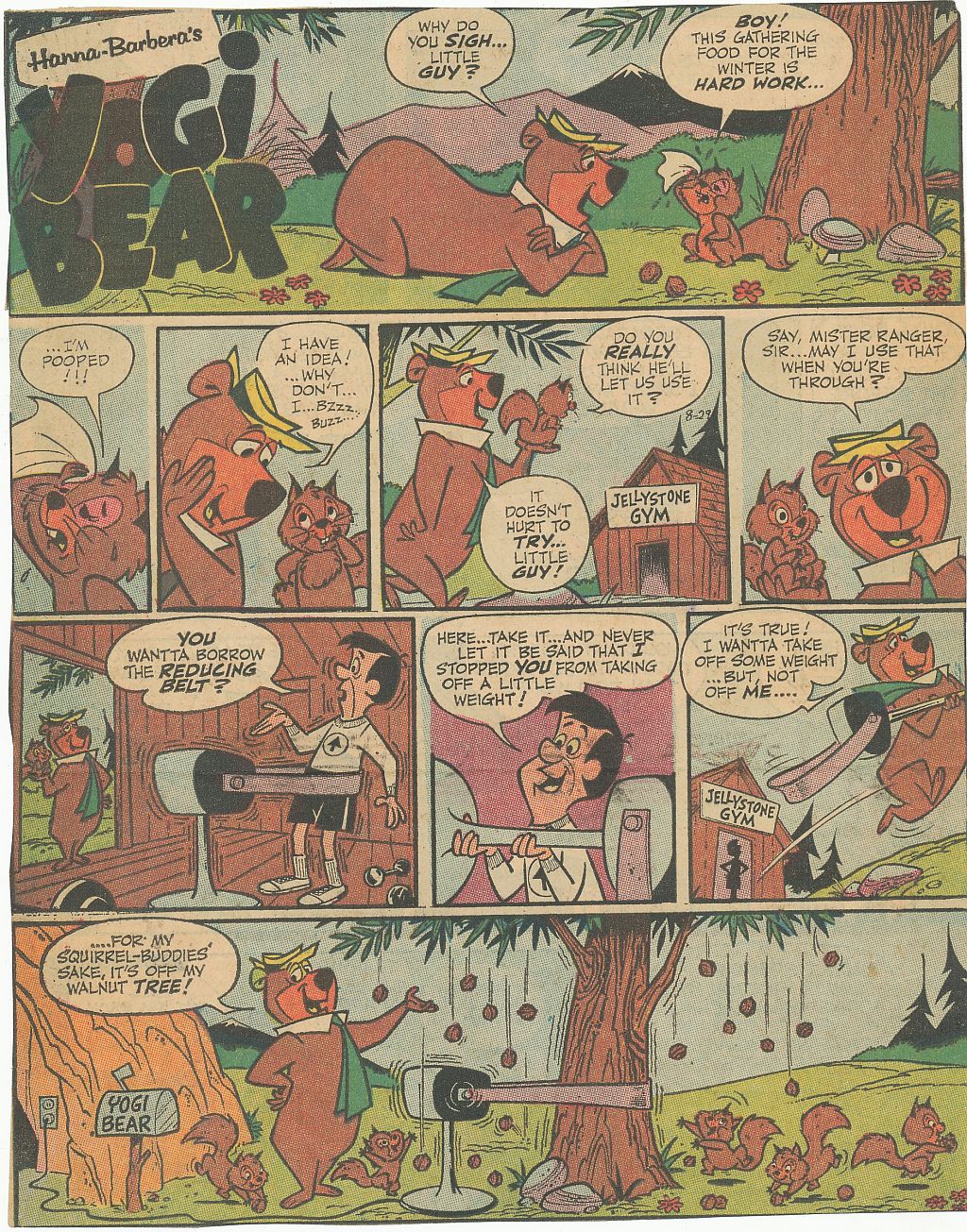 Â Here’s Yogi from the month of August, 1965. I’m missing the 8-8 Sunday page, so perhaps old dog buddy Yowp at http://yowpyowp.blogspot.com will dig it up. (UPDATE: Yowp posted a black and white image of the 8-8 and I have it! I just didn’t know the date, so here it is thanks to the great Internet dog!) These appear to be Iwao Takomoto’s work once again. He does an attractive job of designing these pages, I especially like the 8-1 as Iwao handles the trees and landscape that Yogi and the ram inhabit as a little island surrounded by blue sky. The kid with a huge baseball bat up to bunt in the 8-22 seems like an old Percy Crosby “Skippy” baseball joke, reworked for Yogi.Â  Ranger Smith pops up in the 8-29 along with Iwao’s personal brand of cute squirrels. Again, there is something essentially flat in his character design, especially in the last panel as the squirrels catch the falling walnuts. Harvey would have drawn them rounder and cuter, making them look more like the squirrels in the Barney Bear cartoons “The Uninvited Pest” and “Sleepy-Time Squirrel”. This post got side-tracked for awhile; the power supply on my computer was knocked out by a Glendale power outage on Tuesday night. Evidently the old power supply couldn’t handle the surge when the lights came on again after two hours down. Thanks to Robert Karsian of Jewel City Computers, the old Dell Demension 4550 is now operational and works a little better. Robert restored a “dead” computer back to life with a rebuilt power supply. He even makes house calls! If you are local here in Glendale, CA or surrounding communities, give him a call at 818-457-1207 or email him with your problems at Robert@JewelCityComputers.com . He really knows his stuff!