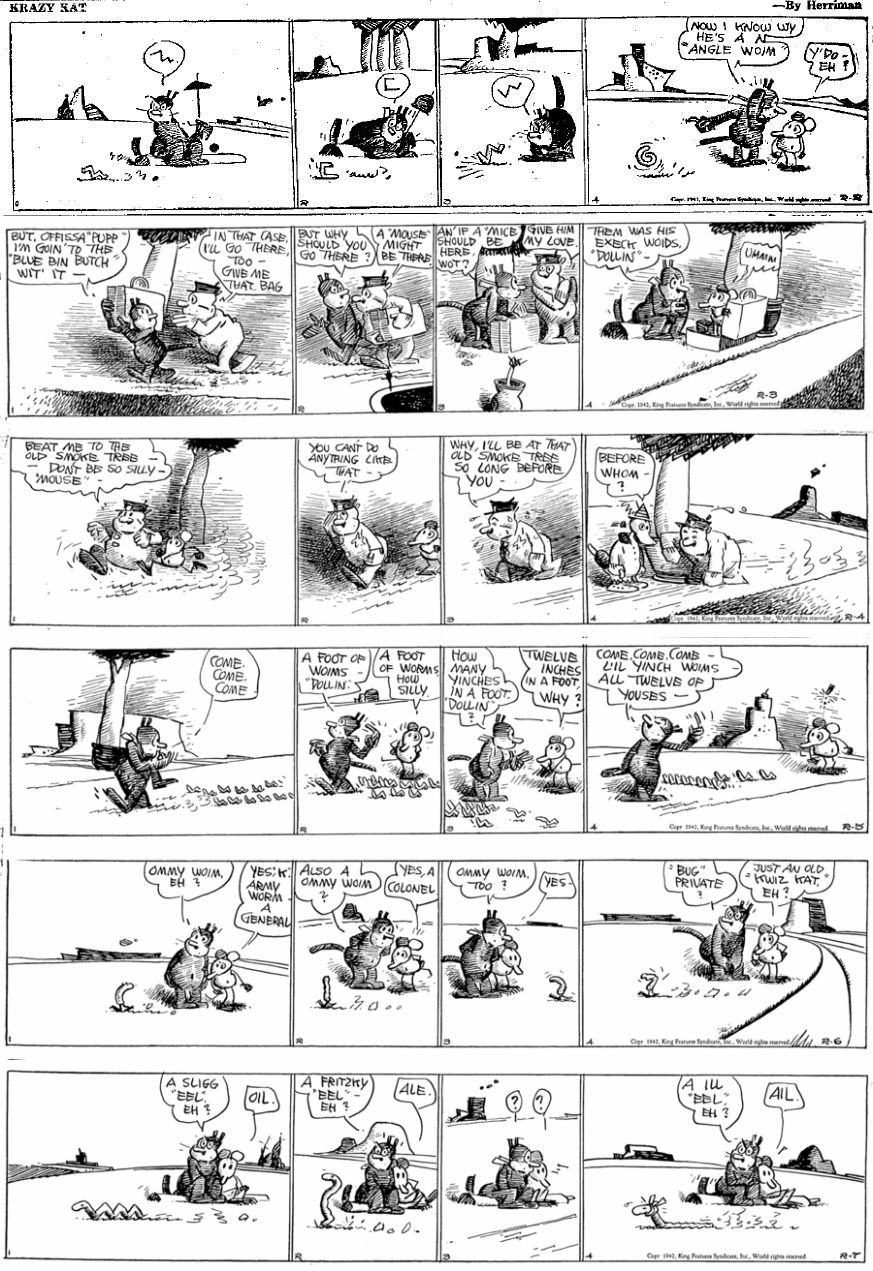 Here’s Krazy, 2-2 through 2-7-1942. This week’s strips remind me of Pogo’s declaration: “It hard to figure the angles on a worm child” in his very first daily strip. Garge does 4 out of 6 all about worms and eels, with appropriate word play, especially in the 2-7. The 2-2 had to be cut from a San Antonio Light, so it is not as good quality as the others.

Felix from 1-22 to 1-28-1934 continues the epic battle for possession of the cheese between Felix and three determined mice. In the 1-23, the mice tie Felix’s tail up through a hole in the floor. In the Animated Antic cartoon; “Pop and Mom in Wild Oysters”, Charley Bowers built almost an entire stop-motion cartoon around the premise of a cat’s tail being tied up in a knot and keeping the hapless animal prisoner; showing a cat and dog struggling to free their tails from the floor boards. Look for this cartoon on You Tube; the mice, Pop and Mom, look a lot like the mice that Otto is using here. The mice escape from Felix with the cheese in a toy airplane in the 1-27. The Sunday page continues Felix’s balloon ascension. This time Danny gets into the act and uses his model airplane to send a bottle of milk to starving Felix. I guess the mice must have sent the plane back to Danny after they escaped!

Myrtle is from 10-27 to 11-1-1947, and has some good gags about Halloween. In the 10-29, Myrtle puts on a false face that’s a near perfect likeness of Sampson, but he’s clueless about the resemblance. In the 10-30, Bingo dons Myrtle’s discarded clothes and fools Sampson (gosh, he’s easy to fool), into thinking he’s going to the masquerade party with the real Myrtle. Remember to cherish your dumb characters folks, if you’re going to write comedy, they come in handy.

There are five Yogi Sundays for December of 1963, the first one is a promo for “Hey There, It’s Yogi Bear”, Hanna-Barbera’s first theatrical feature cartoon, with their Clark Gable of the early 1960s, Yogi. If you look at the last panel, the Bear has gone Hollywood all the way. The 12-19 gag is an old one, but I like the Ranger’s attitude toward the “pump handle” in the last panel. All the art on these are by Harvey Eisenberg. I didn’t know who Harvey was when I clipped these strips in 1963, but I knew his style from the Dell Tom and Jerry comic books I bought at the Old Orchard Phamacy in Webster Groves, Mo. every month. He really made the early H-B characters look good and streamlined, considering they were designed to be broken into pieces, to make animating them more “planned”. Remember to visit Yowp’s blog from time to time to see these Yogi Bear pages at half-page size in black and white with appropriate comments: http://yowpyowp.blogspot.com/ .

Hope you all have a happy Thanksgiving. “Some Other Cat” did not make it to the Short List at the Motion Picture Academy shorts derby this year. Still, I give thanks that it is with us and that people will eventually be able to see it for years to come.