Yowp Asked For It 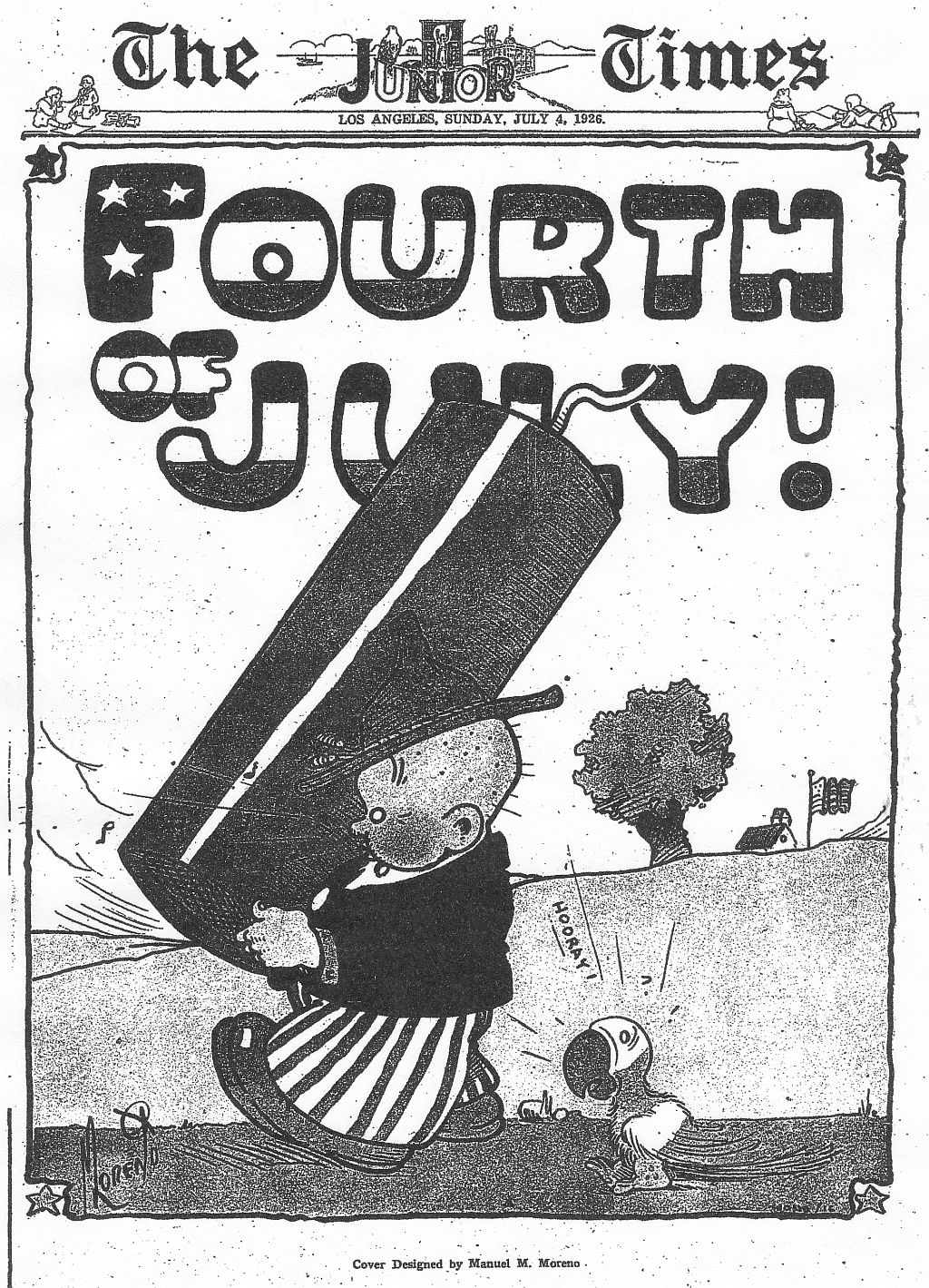 I’m posting again so soon, because it’s that time of the month. Yowp has posted a new batch of Yogi Bear Sunday pages on his website (link in the blogroll to the left). Therefore, I will contribute my versions at the bottom of this post. At the top, you will find more material from the L.A. Jr. Times, July, 1926. A cover for the July 4th issue by Manuel Moreno and three more “Keen and Feeble Tat” strips, plus a collection of spot gag panels that Manuel contributed as space filler for the Jr. Times. There are two more “Fido Bark” strips by Bob Wickersham, a couple of Fred Moore kid strips and a strip by Frank Tipper called “The Average Home” from 7-26.

Here’s Barker Bill, from 5-30 to 6-9-1955. I’ve included the black and white version of the Sunday page we ran last time in color, which proves that the page appeared in 1955, not 1950. Sorry Ger! The “Puddy’s Coronation” story ends on 6-7, as Puddy tries to put his kingdom of Screwbalia on the “Bone Standard” as a monetary value. It nearly causes a revolution, driving Puddy and the Circus back to the States. On 6-8, the story of Newton Mommisboy, reporter, starts as Newton tries to interview a Mermaid who is part of Barker Bill’s circus. On June 5th, the Boston Globe dropped the Barker Bill strip, so the rest of the ones I have come from The Greensburg Daily Tribune, which only ran the daily four days a week. I think we can still tell what’s going on, however, the Greensburg paper’s Google News Archive collection is not as sharp as the ProQuest Boston Globe.

Felix, from 8-5 to 8-11-1935 continues the story of the expedition to the Ape’s Island. Danny is rounded up, and Felix discovers an ancient Chinese jar that’s twenty thousand years old. They sure made jars to last! In the Sunday, Felix cures a man of his superstitious fear of black cats by giving him dreams. I love the design of the black cat that Felix rescues! Pure Messmer magic! 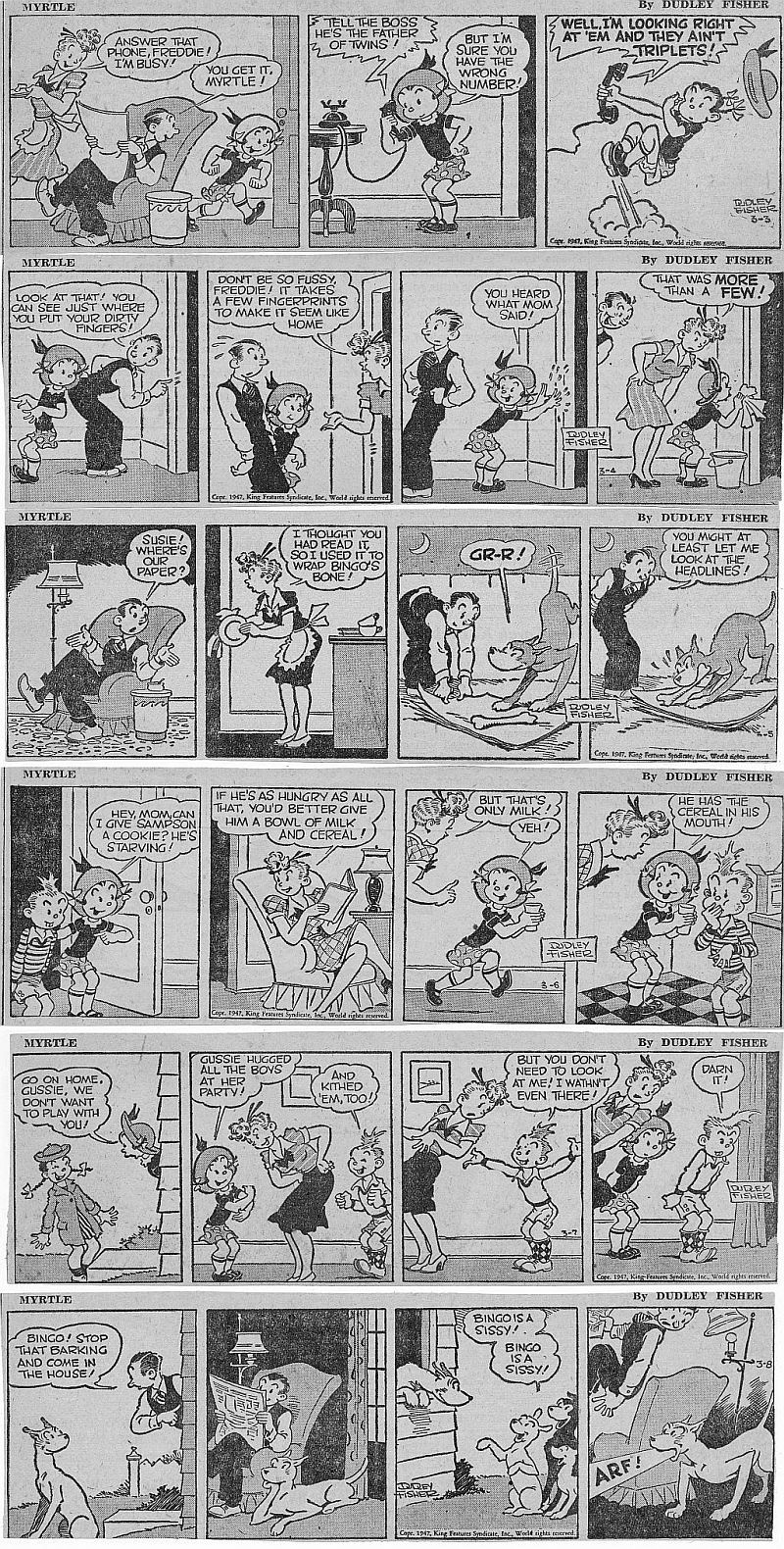 Myrtle is from 3-3 to 3-8-1947.  Bingo is featured in the 3-5 and 3-8. Note the human position of Bingo’s right front leg in the 3-8, as he rests his chin on his paw. Dudley Fisher did an effective balancing act of human and canine attitudes in his dog characters, working them on both levels. Occasionally, Myrtle and Sampson can have “conversations” with Bingo and Hyacinth, as you will see.

Now we’ve come to the reason for this post, the color versions of the Yogi Bear Sundays from 6-3 to 6-24-1962. As you see, they are not half-page, but third-page versions. The Bloom was off the Bear by 1962 as far as the St. Louis Post-Dispatch was concerned, and they demoted Yogi by running him as a third-page feature. Yogi eventually switched to the St. Louis Globe-Democrat which restored the half-page Yogi, those will be coming up next time. Yowp has these strips at the half-page size on his latest post, so go over there to read the missing top row of panels. Most of the art on these is by Harvey Eisenberg, and Doggie Daddy (called “Augie Daddy” in the strip) makes a guest shot in the 6-17. Sorry for the haste in slapping this post together, we’ll do better next time.

By the way, there are new frame grabs from “There Must Be Some Other Cat” over at Itza Cat’s Facebook page: www.facebook.com/someothercat . So head over there, become Itza’s friend. He’d love to get a tummy rub while you’re at it.